Die yourself, and help out a friend. Not succeeding by the end of October, the British pound extended a helping hand to the critical support of $ 1.13 euros, thanks to the improved political landscape and the hawkish rhetoric of the Bank of England. The successes of the bulls on GBP / USD could be even more significant if it were not for the return of investor interest in the US dollar after the release of data on the US labor market in October.

In the absence of uncertainty associated with politics, geopolitical risks, trade wars, and other force majeure, the main factor in the exchange rate on Forex is the monetary policy of the Central Banks. If interest rates rise, the attractiveness of assets denominated in local currency also increases, which increases the demand for it and leads to revaluation. In this regard, Mark Carney’s statement that the repo rate could be raised to 1.5% over the next three years in the event of an agreement between the EU and Britain is a clear bullish factor for the pound. Derivatives market before the November meeting MPC counted on the figure of 1%.

On the other hand, the fastest growth in American wages in almost 10 years suggests that employers face labor shortages in a rapidly growing economy. This suggests an accelerated increase in core inflation and creates a solid foundation for the continuation of the Fed’s monetary restriction cycle. In other words, the roller coaster of GBP / USD in the week to November 2 was the result of a struggle between two titans. Both the Bank of England and the Federal Reserve intend to raise rates. The question is whether their actions are taken into account in the quotes of sterling and the US dollar.

At first glance, the sluggish response of the USD index to a strong report on American employment shows how difficult it will be for the dollar to continue to strengthen. At the same time, it is quite possible that those “bulls”, who had previously been actively dumping the “Americans” from their hands, began to return. The calculation was made on the “pigeon” rhetoric of the Fed in November under the influence of criticism of Donald Trump and the slowdown in inflation. The labor market has thrown investors a new puzzle. And what if the Central Bank manifests itself as a “hawk”? Is it too early we got rid of the US dollar?

Let’s not forget that the pound is still burdened by political risks. Judging by the consensus forecast of Reuters experts, GBP / USD may rise to 1.35 or, conversely, fall to 1.2. Everything will depend on whether London and Brussels agree between themselves. In this regard, information about reaching an agreement on the access of British companies to the financial services market of the European Union is a “bullish” factor for the pound.The fate will depend on the release of data on the GDP of Foggy Albion for the third quarter, scheduled for November 9, and on the change in the political landscape.

Technically, after reaching the target of 88.6% for the “Bat” pattern, a regular rebound began. If the “bulls” on GBP / USD will not be able to take the resistance at 1.3065-1.3125 by storm, this will be evidence of their weakness. 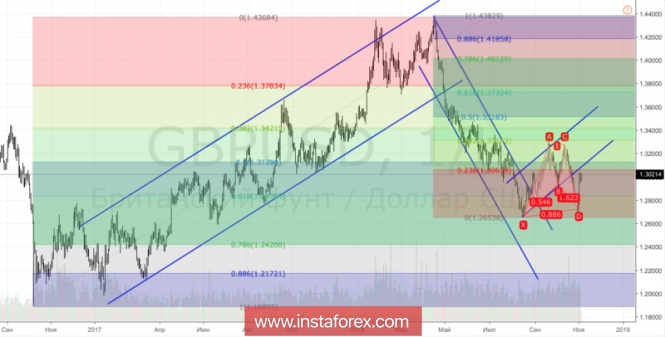