“The Powell Effect”: the head of the Federal Reserve could not support the dollar

The market was eagerly waiting for Friday’s speech by Fed Chairman Jerome Powell in the light of Donald Trump’s recent statements about the actions of the American regulator.

The main intrigue of this speech was not even in assessing the prospects of monetary policy, but in response to the attacks of the US President. Experts disagreed about the possible behavior of Powell, although most analysts were inclined to believe that he would simply ignore this fact. 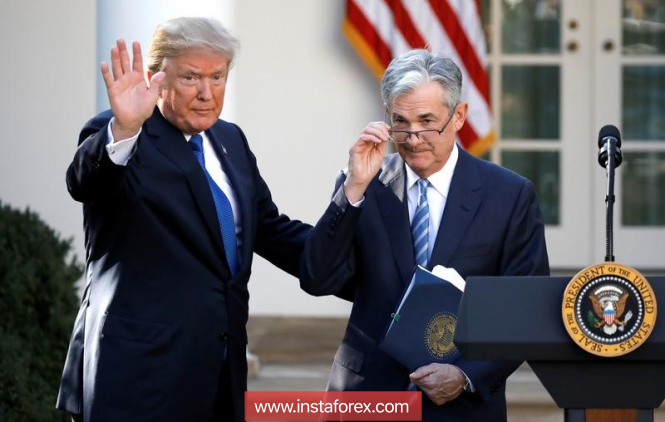 This assumption was confirmed: the head of the Federal Reserve did not comment on the critical statements of Trump, speaking in his usual way. Although it is worth acknowledging that Powell’s rhetoric has softened somewhat: whether this fact is just a coincidence or an objective reflection of reality is an open question. But the market interpreted his speech in its own way, increasing pressure on the US currency. Today, after a few thoughts during the European session, the greenback continued to decline: the dollar index returned to 94 points – for the first time in the last three weeks.

The position of Powell only partly explains the fall of the dollar, especially since the head of the Fed as a whole has retained its “general line”: he assured the markets that the regulator will continue to gradually increase the interest rate against the backdrop of the strengthening of the US economy. Such a positive attitude was leveled by two phrases, on which traders focused their attention.

First, Powell said that at the moment he does not see clear signs of growth of inflation above the target level. Secondly, he said that the Fed does not see signs of an “overheating” of the economy. Such remarks are “dovish” in nature, since in the future they can serve as arguments for a slower pace of the rate hike.

Now the market differently assesses the chances of a rate hike in December and March (the September increase is not even discussed, the market is almost 100% sure of this step). Therefore, if such thoughts of the “dovish” nature will prevail among the members of the central bank, the Fed may postpone the December rate hike to the beginning of 2019, therefore, the March increase – to a more distant date. And do not forget that the Fed is slowly but surely going to the level of a neutral rate (although where exactly is the “natural” interest rate is still a subject of discussion). As the head of the Federal Reserve Bank of Dallas Robert Kaplan recently announced, the regulator will raise the rate three or four times (0.25%) before taking a long pause. In other words, in his opinion, the level of the neutral rate is 2.5-2.75%, whereas previously the regulator members voiced a target of “about 3%”.

After Friday’s speech by Powell, there were speculations in the market that the Fed could make longer pauses between the rate hikes, and the level of the neutral rate “approach” to 2.5%. According to some experts, this scenario might be optimal for both the White house and the Fed. After all, the regulator needs to maneuver between two extremes: on the one hand, to prevent the “overheating” of the economy by a too slow a rate hike, on the other hand – not to “strangle” the growth of the economy by tightening the terms of monetary policy. The above scenario with such “inputs” is very optimal. At least, this was more often said among currency strategists.

Naturally, such an option was negatively perceived by dollar bulls, which, after the release of the latest data on US GDP growth, laid a more “hawkish” scenario: two more increases this year, and three – in the next. Therefore, the notes of indecision Powell made such an impressive effect.

By and large, the head of the Fed did not change the course of monetary policy, but prepared a kind of springboard for slowing the pace of rate hikes in the future. In light of Trump’s recent statements, such conclusions look quite plausible, especially if the growth rate of the US economy in the third quarter slows down. By the way, the second estimate of GDP growth for the 2nd quarter will be published on Wednesday: according to preliminary data, the indicator will be revised downwards, albeit slightly (up to 4% from 4.1%). But if the indicator is worse than the forecast values, the dollar will be under additional pressure.

However, not only the rhetoric of Powell puts pressure on the US currency. The dollar has ceased to enjoy active demand as a “safe haven” against the background of a certain geopolitical detente. Washington agreed with Mexico city on the fate of NAFTA, the first round of US-China trade negotiations ended with “cautious optimism”, and the Turkish Lira suspended its decline. And although these fundamental factors are weak enough to put pressure on the dollar, in their totality they have achieved a certain effect.

Speaking directly about the euro/dollar pair, the present release (the only more or less significant for the whole day) was an additional impulse for an upward movement. This is an indicator of the business environment in Germany from IFO. This indicator is of secondary importance for the currency market, but in the absence of other news, it influenced the dynamics of the pair. Moreover, the figure jumped immediately to 103.8 points – this is the best result since February this year. This picture gave strength to the European currency, after which the bulls of the EUR/USD seized the initiative (although in the morning the pair “dipped” in the framework of the 15th figure).

The upward impulse allowed it to break through the lower boundary of the Kumo cloud on the daily chart (1.1655) and to designate the following target: 1.1750 (the upper boundary of the Kumo cloud, which coincides with the upper line of the Bollinger Bands indicator). If the price is fixed above this target, the Ichimoku Kinko Hyo indicator will form a bullish signal “Parade of lines”, and then the pair can reach the area of 19-20 figures. But while the price is trading below this level, it is too early to talk about it.