The dollar continued its growth, and the first push gave data on the labor market in the UK, which, frankly, were extremely weak. So the pound, through the dollar index, pulled along a single European currency. But it did not stop there, and the dollar went up all day. Growth in the dollar was supported by data on industrial production, the growth rate of which accelerated from 3.2% to 3.8%. The contribution to the strengthening of the dollar introduced the head of the Fed, whose statements were quite curious.

After the press conference, Mr. Powell was questioned about customs duties and trade agreements, to which the head of the Federal Reserve said he did not agree with the policy of the White House. In his opinion, it is necessary to strive for the complete removal of all trade barriers in international trade. He also added, that while there is no way to calculate the consequences of the trade war, which in fact has already begun. However, unlike the ECB and the Bank of England, which mention trade disputes in the context of the refusal to tighten monetary policy, the Fed does not intend to revise its plans at the refinancing rate. Once again, the head of the US Central Bank confirmed that the refinancing rate will be raised once more by the end of the year. Such a confident position of the Fed gives the dollar strength that until the end of the year the refinancing rate will be increased one more time.

Today in Europe, the final inflation data is coming out, which should confirm the preliminary estimate, which showed an increase in inflation from 1.9% to 2.0%. Given that the growth of inflation in Europe is already taken into account by the market, and also the fact that the ECB has changed rhetoric, now, the inflation is not a criterion for changing the policy of the European regulator. The final inflation data will not have a significant impact on the market. American statistics are expected to be multidirectional, as the number of construction projects to be reduced by 2.2%, but the number of issued building permits may increase by 6.0%.

Given the strong overbought dollar, as well as the multi-directionality of US statistics, the probability of the growth of the single European currency to 1.1675 is high. If the data on the construction sector are better than expected, the euro may get stuck at the level of 1.1600. 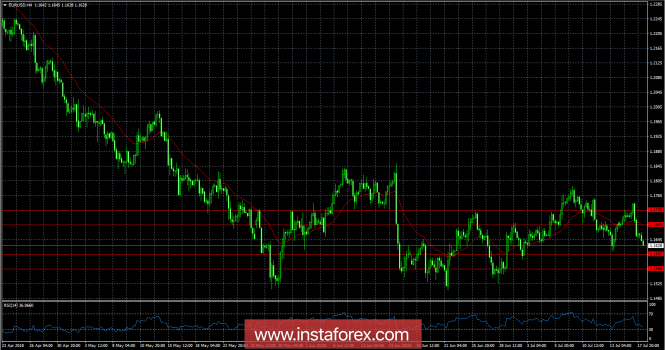