Strong data on wages will support the dollar

Today, the central event of the day will be the release of data from the US labor market. Whether they will influence the markets or not, we will learn in the afternoon, but the fact that this will lead to a noticeable revival in the foreign exchange market is definite.

According to the forecast, the US economy will have to get 193,000 new jobs in July, while the unemployment rate is expected to fall to 3.9% from 4.0%. It is important to note that the June values of the indicator were traditionally strong, showing an increase of 213,000, but strangely enough, they did not, in themselves, cause the movements in the markets, namely, the figures for the average hourly wage were this driver.

This market behavior is probably due to the fact that investors are “used” to strong values of employment indicators, and the Fed itself now focuses its attention not on this, but rather, it looks at the overall dynamics of economic growth and production indicators and, of course, the behavior of inflation. It is here that we should pay attention to the change in the average hourly wage, the values of which will be presented today. This indicator is actually one of the components of inflation, therefore, the growth of wages, according to monetary theory, will affect the expenditure of the population, which will contribute to higher inflationary pressures.

It is expected that in July, it will add 0.3% against the increase in June by 0.2%. The annual value of the indicator should maintain a growth rate of 2.7%. In our opinion, if the data proves to be higher than the forecast, it will have a general local wide support for the exchange rate of the American currency. At the same time, if they go below expectations, it can trigger profit taking in the dollar and lead to its decline. But in general, if you assess the likely movements of currency pairs, where there is a dollar, then most likely, the overall lateral dynamics will continue.

The EURUSD pair is trading lower with the expectation of positive data from the US labor market, as well as the positive dynamics of average wages. Crossing at the price of mark 1.1580 opens a couple of ways for further fall to 1.1500-10.

The GBPUSD pair is trading above the 1.3000 level. If this mark is overcome on a wave of good data for the dollar and news on economic statistics, we can expect the price to fall to 1.2900. The pressure on sterling is also still the result of the meeting of the Bank of England, which made it clear that it is not worthwhile to expect the continuation of the rate hike in the near future. 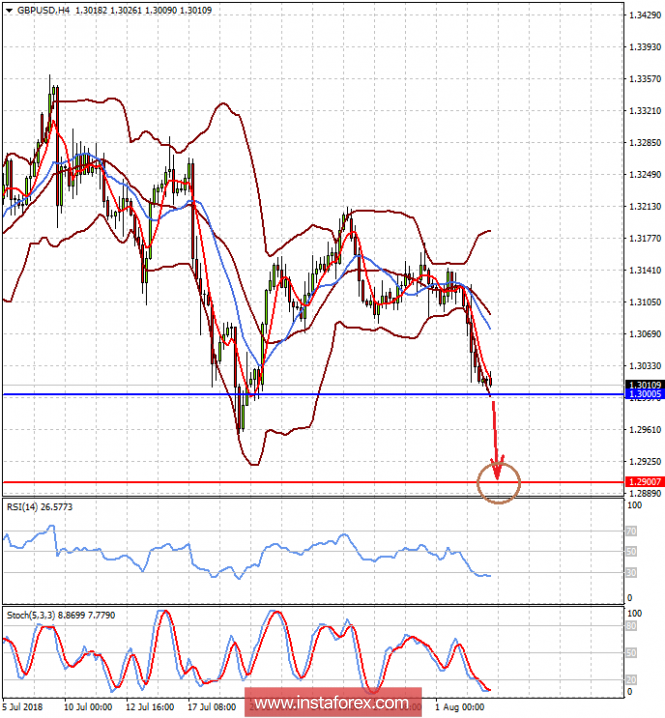