On Thursday, the strengthening of the dollar stopped due to the statement of Donald Trump about the undesirability of raising base rates and the trend for strengthening the national currency. As a result, the euro grew by 60 points from the minimum of the day and closed near the opening level. But in an interview with Trump, we did not see any correlation of interest rates but more on the the dollar’s rate with the US economy. He simply expressed his long-held positive view of a cheap loan (although two years ago he spoke out sharply against the policy of low rates). Similar statements were made by Bush Jr., but they did not affect the Fed policy. Until the United States can safely serve the public debt (21.201 trillion dollars on July 18), changes in monetary policy can not be feared. Historically, the statements of the presidents about monetary policy and the dollar exchange rate served only to entangle a broad stratum of investors.

Against the backdrop of yesterday’s statements by Trump, investors lost sight of the possibly main event of the day, as the number of applications for unemployment benefits reached a historical minimum (at least since January 1970) – 207 thousand. Also, the business activity index in the manufacturing sector of Philadelphia in July Increased from 19.9 to 25.7 with an expectation of 21.6.

Today, the euro zone’s balance of payments for May will be published with a negative outlook: EUR 27.2 billion versus USD 28.4 billion in April.

On the technical side, the situation yesterday did not change. The price remained above the balance sheet and trend lines. While the Marlin Indicator is in a neutral position. 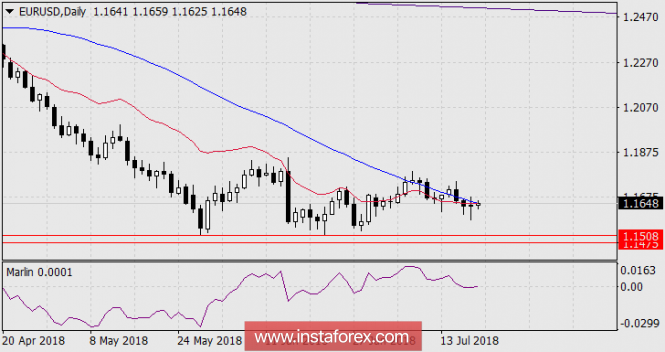 On the H4 chart, the price is also below the balance and trend indicator lines, but Marlin warned of some increase in growing sentiment. But also its convergence with the price can be considered completed. We are waiting for the price to return to yesterday’s low and further decline in the range of 1.1475-1.1508. 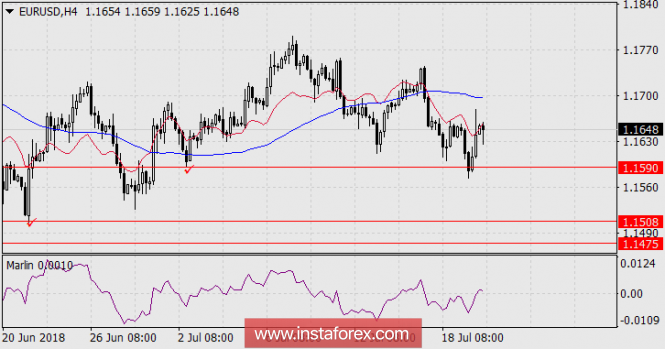