The dollar completes the trend to strengthen

The FOMC meeting, which ends today, is unlikely to bring any surprises that could lead the markets out of balance. It is expected that the target range for the rate will remain unchanged, and the only thing that can give at least some information is a accompanying statement, which, however, is also unlikely to undergo any changes.

Everything that the Committee would like to change at the current stage, was done at the June meeting, removing from the text a few proposals and making it clear to the markets that the rate is now close to neutral. Since at a recent congressional hearing, Federal Reserve Chairman Powell did not propose any new interpretations for the current policy, it is unlikely that this will be done at today’s pass-through meeting.

High optimism about the prospects of the US economy remains, as evidenced by the indicators from the University of Michigan and NFIB, which gives the Fed the right to adhere to the chosen strategy, even despite the alarming dynamics of the yield curve.

At the same time, there are more alarming signals. According to the US Department of Commerce, in June, the growth rate of personal consumption expenditure instead of the expected growth came at the level of May indicators, there is no positive dynamics in the income item, which may indirectly indicate a decline in consumer activity. This is a logical consequence of the weak average wage growth rates, which have been stable over the past two years and are clearly insufficient to contribute to the growth of inflation expectations. The last parameter is eloquently reflected in the dynamics of the yields of 5-year TIPS bonds, as of July 30, the yield on them is at the 3-month low of 2.01%, significantly dropping from 2.16% in mid-May.

Nevertheless, the situation does not look threatening, at least it will not force the Fed to reconsider the rate of growth, but for the prospects of the dollar, this information may be significant. 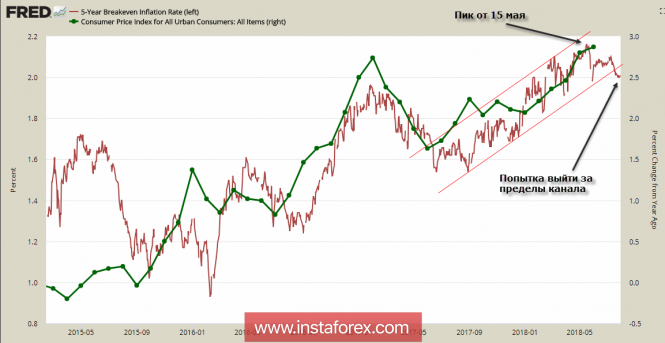 Weak inflation expectations against the background of the Fed’s balance sheet reduction and, as a result, the reduction of the monetary base can lead to a fall in the lending rate of both the consumer sector and the economy as a whole, which is tantamount to a slowdown in economic growth. These prospects, which are inextricably linked with the tightening of financial conditions, may lead to the fact that the demand for the dollar, which allowed it to grow in the last year, will begin to weaken, which against the background of expectations for tightening monetary policy by the Central Bank of England and Japan, as well as the ECB will lead to the end of the trend for the growth of the dollar.

The Bank of Japan did not live up to market expectations, announcing a different way than it was predicted, a way out of the soft monetary policy, without providing any temporary guidelines. The assessment of the state of the economy remained unchanged, the asset repurchase program was extended at the same level of 6 trillion yen a year, the deposit rate and the target target yield level of the bonds were maintained unchanged. This was enough to provoke the sale of the yen, even despite the “more flexible way of buying bonds.”

USDJPY will continue to grow, the nearest target is 112.80.

Preliminary data on GDP for the 2nd quarter were much worse than expected, growth was only 2.1% against 2.5% a quarter earlier. A weak report could trigger the euro’s sell-off, but unexpectedly strong inflation data, which showed a 2.1% rise against expectations of 2.0% in July, supports the euro.

The Bank of England will hold an important meeting on Thursday, which is expected to raise the rate by a quarter of a percent. This step has already been taken into account by the market and will not contribute to the growth of the pound. At the same time, a number of macroeconomic parameters look weak, the situation with Brexit is far from ideal, and the pound is clearly losing to the euro in the players’ likes.

GBPUSD will continue to trade in the range with a downward trend, support for 1.3072, resistance at 1.3213 until Thursday, further prospects will depend on whether the Bank of England will be able to surprise the markets.