The dollar fell under the crossfire

When enemies strike from all sides, you do not know where to go. “Bulls” in the EUR / USD went into a rapid counterattack after the statistics on US inflation came out, and Mario Draghi downplayed the importance of panic in the markets of developing countries and political risks in Italy at the press conference following the September meeting of the ECB. Before that, rumors of a new round of talks between Washington and Beijing had already disturbed the sleep of the dollar’s fans, but as it turned out, these were florets. Berries were ripe later.

The release of data on the US labor market, in general, and statistics on average wages, in particular, returned the location of the “bears” for EUR / USD at the end of the week by September 7. Labor compensation increased by 2.9% y / y, demonstrating the best dynamics since 2009. The market started talking about the potential overclocking of inflation under the influence of increased activity of consumers, which raised the chances of four acts of monetary restriction of the Fed in 2018 above 80%. In fact, everything turned out differently: neither the producers’ prices nor the consumer prices reached the forecasts of Bloomberg experts. In the air hung the question: is it worth the Fed to raise the rate as aggressively as before (once a quarter)? Is it possible that in 2019 it should be left at all? If so, the dollar will lose its most important asset – divergence in monetary policy. If the ECB also starts normalizing, the main currency pair will easily restore the uptrend.

Of course, the rising rates are not the only trump card of the “American”. No matter how much Donald Trump complained about the strong currency to the local gas exporters, he helps the USD index rise. It’s about developing panic in the markets of developing countries in response to Washington’s trade wars and the growing risks of a slowing global economy. The US dollar is quite sensitive to the dynamics of the volatility of EM currencies and the monetary units of developed countries.

Dynamics of the dollar and volatility 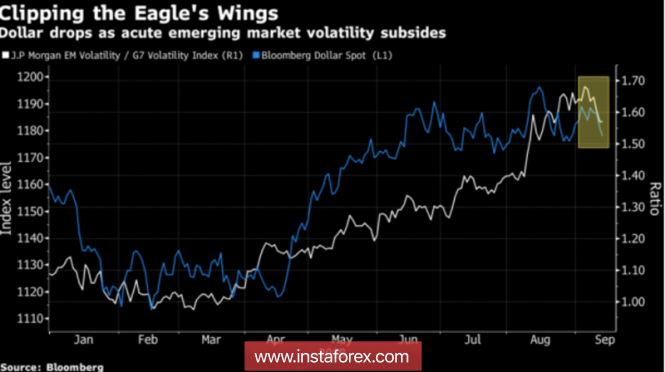 In this regard, the increase in rates by central banks of Turkey and Russia allowed to stabilize the situation in the sector and became one of the factors of EUR / USD growth. Moreover, Mario Draghi does not think that the problems of emerging markets are the reason for the slowdown in the euro area economy. Theoretically, the export-oriented currency bloc could get a hole due to a drop in global demand, but for now, it’s too early to say: the scale of import duties already imposed is scanty compared to the economies of the US and their competitors.

Of course, negotiations between Washington and Beijing do not necessarily have to end with a breakthrough, and the slowdown in consumer prices from 2.9% to 2.7% and core inflation from 2.4% to 2.2% may turn out to be a market noise. This will allow the dollar to recover.

Technically, if the bulls on the EUR / USD manage to gain a foothold above the level of 1,1705 (38.2% of the rising long-wave) and then take the resistance by 1,179, the targeting of the 88.6% target by the pattern of the Shark will increase substantially. 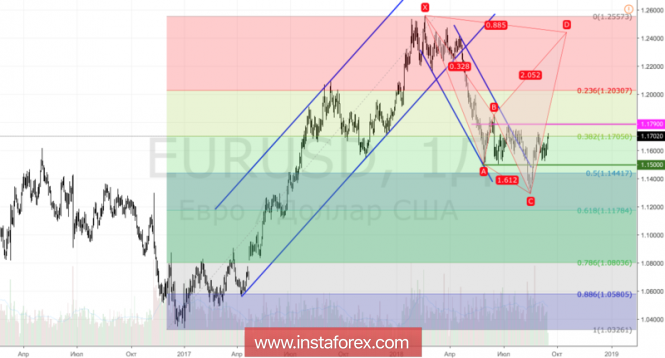