The dollar is looking for a foothold

The US dollar froze in a rather narrow range against its main competitors, as the main driver that pushed it towards strengthening in recent months is questioned. First of all, the Fed’s plans to normalize monetary policy, implemented since 2015, risk leading to negative consequences in the economy and even to a recession much earlier than it was supposed quite recently. The strength of the US economy is questioned, the tax reform gives a result below expectations, which is reflected in the revision of forecasts both for tax revenues and the budget, and on Trump’s ability to carry out the promised modernization of the economy. The HIS Markit report on business activity in July showed that the impetus to economic growth after the launch of the tax reform is nearing completion. The growth in production volumes recorded in the second quarter is coming to naught, but threats regarding tariff wars and higher prices look more and more significant. The output in June at 54.6p is the weakest since November last year, in July the growth will be even smaller, the June inflow of orders is also at a minimum since November, which directly indicates a slowdown in demand, export orders fell for the first time in 11 months. 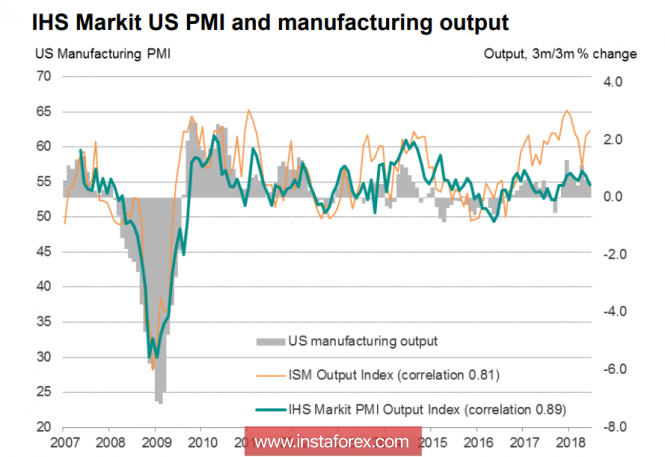 The main problem reported by managers, according to polls is the threat of escalation of tariff wars. We remember the origins of this war, right after the election to the office of president, Trump announced that he intends to fight an unjust, in his opinion, imbalance in trade relations. Almost immediately, before the inauguration, attempts were made to force Japan, Germany, Mexico and China to voluntarily consider investing in the American economy, to finance the plan for the re-industrialization of the United States announced in the pre-election race.

This cavalry assault was not successful, of the large countries with a surplus in the trade balance with the United States, only Japan agreed to invest in infrastructure projects in the US to $ 200 billion. The rest to such initiatives were cool, rightly judging that the reasons to violate the balance of interests should be more weighty.

The situation is deteriorating, tax revenues have again begun to decline. In June, receipts were 6.6%, less than a year earlier, and this is with growing costs, and what will happen when the Fed rate reaches a target of 3%? The budget deficit in the fiscal year 2019 will exceed 1 trillion, and China and the European Union do not intend to yield to the growing military pressure.

China is determined and, in addition to the devaluation of the yuan, it can start implementing a program to reduce exports for US dollars, which will inevitably lead to a reduction in its share in the purchase of US bonds, even without special sales, which in turn will increase the yield of bonds and bring the recession nearer. These and some other factors come to the forefront of risk assessment, which ultimately leads to a decrease in demand for the dollar.

The currency pair EUR / USD continues to trade in the range before the ECB meeting on Thursday, the breakout of resistance 1.1790 looks more likely and the attempt to gain a foothold above 1.1850 by the end of the week. This conclusion is due to the expectations of the appearance of aggressive elements in Draghi’s speech at the final press conference.

The currency pair GBP / USD also has no direction, trading by the end of the week is likely to be concentrated in the range of 1.3090 / 3230.

The currency pair USD / JPY before the threat of further decline, as the market is waiting for hawkish news from the upcoming meeting of the Bank of Japan on Tuesday. Markets are waiting for practical actions to adjust the yield curve, which may result in both growths in yields of bonds, and in strengthening the yen. USD / JPY by the end of the week may fall below 110.75.