The dollar is not ready for correction yet

The news that China and the United States are planning to hold trade talks helped to ease tensions in financial markets and led to a correctional decline in the dollar, but the level of the Chinese delegation is clearly insufficient to resolve the accumulated issues.

The dollar index reached its peak in more than a year, as a number of factors contribute to its growth: the monetary policy of the Fed is washing it out of developing countries, and the threat of a large-scale trade war forces investors to look for safe assets, and the dollar, as the world’s main currency, is on this list under the first number.

However, everything is not so rosy, if you look at the numbers. The US Treasury’s report on cross-border financial flows shows that foreign capital does not at all seek in the US. For several months now, the gross sales volume of private and public counteragents has been growing faster than purchases, in June the balance for the first time since last year became negative, and even more indicative, a steady decline in foreign capital in the stock markets has been observed for 6 months already. 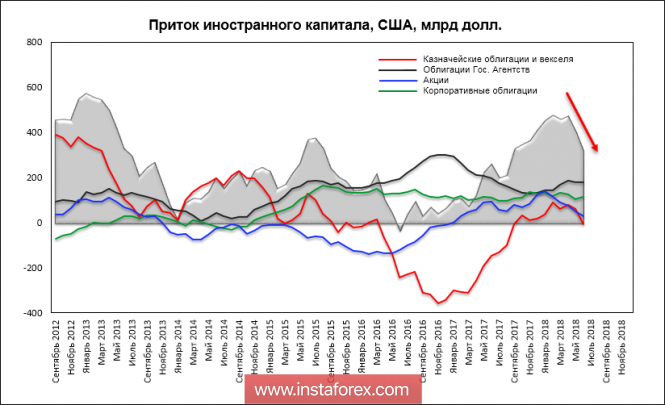 What causes the US economy to grow at a rapid pace, and why the US stock indices look better than in other countries?

The answer is simple, a source of growth in good old buybacks, or a reverse buy-back of stocks. According to Goldman Sachs, US companies will send for a buyback of shares to a trillion dollars this year, the total amount of funds involved in the buyout will increase by 46% compared to 2017.

There is money for this process. The graph below shows the dynamics of corporate income before and after taxes, there is a sharp increase in the second indicator, this is a consequence of the tax reform, which eased the financial burden on companies, and it is this revenue growth that is the source of the confident behavior of the stock market. At the same time, we note that the gross income of companies before taxes has so far hardly reached the level of the third quarter of 2014, that is, the tax reform has not given any economic effect yet. 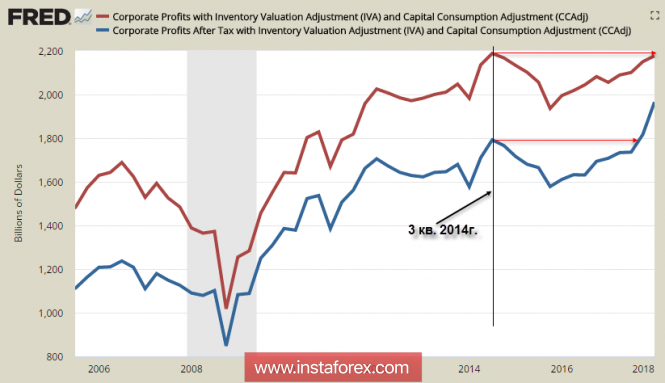 The figures point to a rather entertaining process – easing the debt burden leads to the desire to expand buybacks, but not to the growth of the economy as a whole. Expansion of the same buybacks directly indicates that companies are under the most severe debt press, and therefore are forced to direct all available funds in order to prevent a decline in capitalization. Expansion and modernization of the economy, as Trump hoped, is still out of the question.

The US economy continues its growth solely at the expense of outstripping growth of debts at all levels, the margin of safety becomes no higher, but lower, as evidenced by the dynamics of cross-border capital flows. The toughening of the trade war with China is more than likely, since the positions of the parties are antagonistic and a compromise without serious concessions is impossible, and the growth of the dollar rate and the Fed rate increase will inevitably lead to a decrease in corporate profits. Together, these factors will put a lot of pressure on the US stock market, which can go into deep correction in the coming months.

Nevertheless, in the short term, the dollar will continue to be in demand, and its strengthening against major competitors is more than likely.

Today Eurostat will publish data on consumer inflation for July, the expectations are neutral and, if they are in line with the forecasts, will not have a noticeable impact on the euro. The reasons for the political nature continue to adversely affect the euro, which remains under considerable pressure.

The most likely scenario for Friday is trading in the range of 1.1345 / 1410, towards the end of the day the decline to the lower end of the range and the attempt to go lower.

Positive dynamics in the pound is not, after a short correction, a high probability of continuing the decline. Exceeding the forecasts for retail sales in July did not make any impression on the players, the pound for the resumption of growth requires a serious breakthrough in the negotiations on Brexit and steady growth of the economy, in practice, neither one nor the other is observed.

Corrective growth is limited to resistance 1.2750, near which sales can resume, the week the pound will complete, most likely, near support 1.2670.