The dollar is preparing for elections

In the 4th quarter of 2018, the US Federal Reserve will increase the monthly balance reduction to $ 50 billion / month. Accelerating the rate of balance reduction can lead to a lack of liquidity and will contribute to the strengthening of the dollar in the short term, at least before summing up the results of elections to the Congress and in the longer term, before the next Fed meeting in December and the likely correction of long-term forecasts.

Reducing the balance will lead to a reduction in the monetary base. 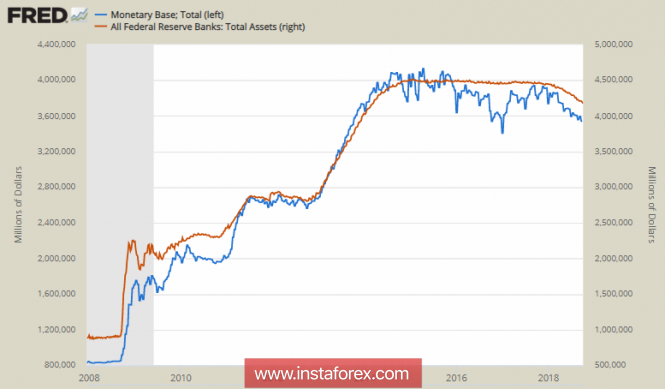 At the current stage, the Fed is reducing its balance sheet, but this process will obviously be accompanied by a reduction in the monetary base. This factor is one of the most powerful drivers in favor of strengthening the dollar, along with the yield spread. 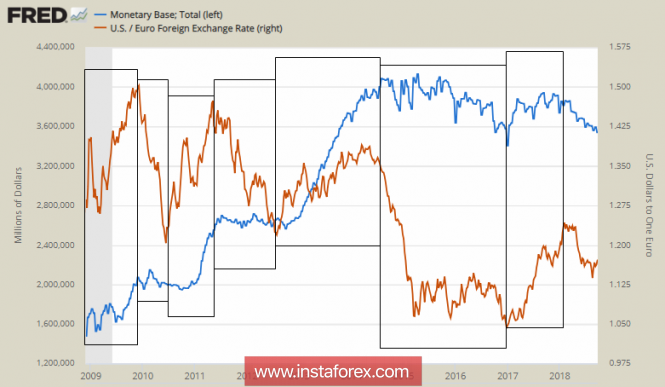 Thus, dollar strengthening is an objective process and directly follows from the Fed policy. Only two factors can stop this strengthening, the policy of normalization by other central banks or the inability of the US economy to withstand the pace of tightening financial conditions.

There are changes on the first point, but they are not significant enough to stop the trend for the dollar. The Central Bank of Japan changed the bond redemption program, which led to an increase in yields, but these measures are more cosmetic and do not pose a threat to the dollar. The Bank of England began the rate growth process, but the growth rates noticeably lag behind the Fed (no more than one increase of 0.25% per year), and, secondly, there is no talk about reducing the Bank’s balance sheet. You also need to keep in mind the problems with Brexit, which can lead to a significant deterioration in the trade balance and budget revenues, as well as low GDP growth. The ECB is consistently reducing asset redemption programs, the first rate hike is expected no earlier than the summer of 2019 (and most likely in the fall), and there is no talk about balance reduction.

Thus, the US Federal Reserve Bank is ahead of other central banks for at least 3 years, and therefore there is no threat of a trend reversal on the dollar from this side.

Significantly large concerns are the state of the US economy. Official statistics, reflecting the state of key parameters, confidently positive, consumer confidence at the highs, the labor market is approaching full employment, GDP growth rates are high, ISM business activity indices are at 10-year highs. At the same time, there is one factor that negates all these advantages with the stroke of a pen, these are budget revenues.

According to the CBO, the budget deficit in the fiscal year 2018 reached 782 billion, and this is an adjusted figure, taking into account the output, without them, the deficit would have been 826 billion, or 4.1% of GDP. The cost of interest payments increased by 62 billion, or 20% compared to 2017, in general, the revenue side of the budget is reduced, and the expenditure side increases. The situation is developing so rapidly that the NWO is forced to adjust the long-term forecasts issued in June in the direction of deterioration.

NWO fears that the development of the financial crisis will lead to the refusal of investors to finance government loans, unless they are accompanied by very high interest rates.

The fate of the dollar is decided in the coming months. While the trend to strengthen it is not in doubt, however, it should be supported by strong macroeconomic data, otherwise, a new financial crisis is likely to occur already in the first half of 2019.

The pound has support from rumors about a possible compromise on Brexit, so it will look a little better than the euro during the day. More likely to trade in the range of 1.3030 – 1.3130 with a chagrin to the upper boundary.