The dollar returns to the game

The US dollar did what it had to do. It strengthened due to the increase in the Federal funds rate to 2.25% and the Fed’s intentions to bring it to 3.5% in 2019. The central bank plans to tighten monetary policy once this year and three times next year, which makes the “greenback” a very attractive currency against the background of the slowness of its main competitors. Yes, the head Of the Bank of Austria Ewald Nowotny requires an earlier increase in the rate on deposits from the ECB, but the “hawks” of the Governing Council would not be “hawks” if they did not make such statements. While core inflation in the euro area is not going to go far from the 1% mark, the European Central Bank is unlikely to change its plans.

The divergence in the monetary policy of the Fed and the ECB is not the only trump card in the hands of the “bears” for the EUR/USD. The peak of the pair in April-August was associated with different rates of economic growth and trade wars, and if investors’ views on the conflict between the US and China have changed, hen there is little doubt in the strength of the American economy. The growth in the negative balance of trade led to a deterioration in GDP forecasts for the third quarter from the Atlanta Federal Reserve to 3.8%, but this figure is still impressive. At the same time, the dynamics of business activity in the eurozone indicates serious concerns of the manufacturing sector, and given the close correlation of the purchasing managers’ index and GDP, it can be assumed that the economy of the currency bloc is far from its optimal conditions. As if under such conditions, the ECB did not have to postpone plans for the start of the normalization of monetary policy in September 2019 for a later period.

Another problem of the euro is Italy. Eurosceptics secured from the Ministry of Finance of the republic a budget deficit of 2.4% of GDP in order to fulfill pre-election promises. But this figure does not effectively reduce the debt of the country to €2.3 trillion. In its absolute size, Italy is the largest borrower of the eurozone, in relative terms – inferior to one in Greece. Yes, after a compromise in Rome was found, the markets calmed down a bit, and the yield differential of Italian and German bonds could not rewrite the three-month highs recorded at the beginning of September, but who knows what will happen in October? 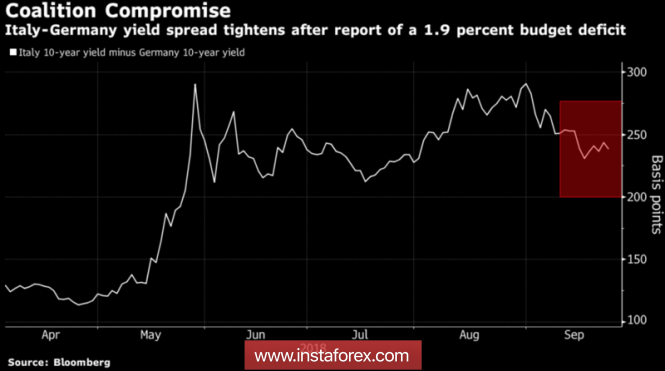 Thus, the EUR/USD pair has plenty of trump cards to continue the downward campaign, however, I would not write off the euro from accounts ahead of time. First, as the midterm elections in the US approach, the dollar will be worried about political risks. Second, if macroeconomic statistics for the eurozone begin to improve, and Italy’s financial markets stabilize, the single European currency will gain ground. In this regard, it is extremely doubtful that the main currency pair could rewrite the August low.

Technically, the “bears” for the EUR/USD pair intend to storm the support at 1.153-1.1535 and activate the subsidiary “shark” pattern with a target of 88.6%. If they succeed, the risks of continuing the peak to 1.135 will increase. 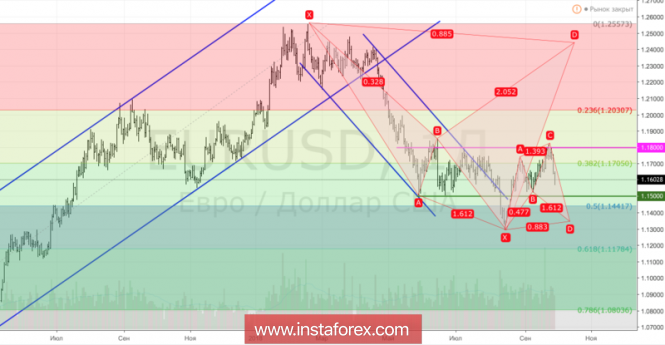