The euro and the pound enjoy the weakness of the dollar

The dollar received several sensitive blows on Thursday, losing some of the advantages against European currencies.

A little later, the US Treasury announced that the budget deficit in August amounted to 214 billion, which is much worse than forecast, interest payments on debts amounted to 38 billion, or 17% of revenues, and this figure will only grow further.

We have already paid attention to the behavior of the yield curve. The current dynamics indicate the probability of a recession already by the end of 2019. The growth of the budget deficit will accelerate, which in the near future can lead to a crisis, that is, inability to execute the budget. Tax cuts have led to an increase in corporate income, but additional funds are channeled. First of all, to operations for buying back shares and supporting capitalization, while real steps aimed at increasing industrial production have not yet been observed.

The tariff war launched by Trump against China was supposed to stimulate US corporations to return production facilities to the US, but in practice, there are no movements in practice.

The ECB did not submit any new signals on Thursday at a meeting on monetary policy. The loan rate remained unchanged at zero level, the deposit and margin rates were maintained at 0.25% and 0.4% respectively, it was confirmed that the asset repurchase program would be completed in December.

At the same time, after the completion of the period of net purchases, reinvestment from the redemption of bonds will be continued, to the reduction of the balance of the ECB can start as early as next year, this will be a significant bullish factor for the euro. 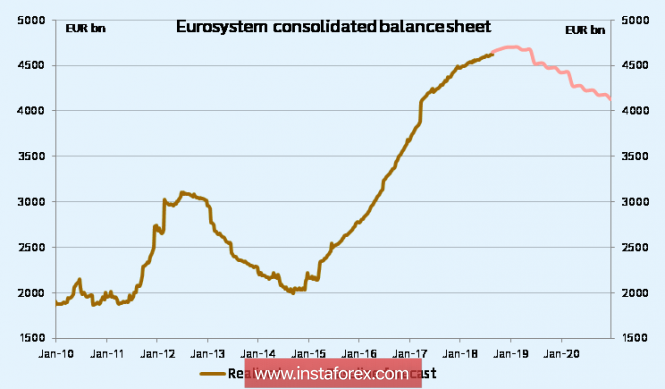 At the same time, the forecast for GDP growth for 2018 was reduced from 2.1% to 2.0%, in 2019 from 1.9% to 1.8%, the inflation forecast is confirmed at the same level. The euro almost did not react to the results of the meeting, continuing to trade in the sideways range, and began to rise only in the afternoon after the publication in the US of disappointing inflation data.

The external risks for the euro are mainly reflected in the expectations of falling demand, in many respects, precisely these fears caused the decline in the forecast for GDP.

Euro still remains the favorite against the dollar, today it is possible to exit above the trend line and move to the previous high of 1.1733.

As expected, the Bank of England unanimously voted to maintain the rate at the current level of 0.75%, no changes in the monetary policy are planned. In the accompanying statement, there is a probability of higher than expected GDP growth in the 3rd quarter, after the publication of a strong report for July, the level of the natural interest rate, which corresponds to a neutral monetary policy, is seen by the Bank of England at the current stage at 1.5%, that is, plans to raise the rate three times in the next year or two. 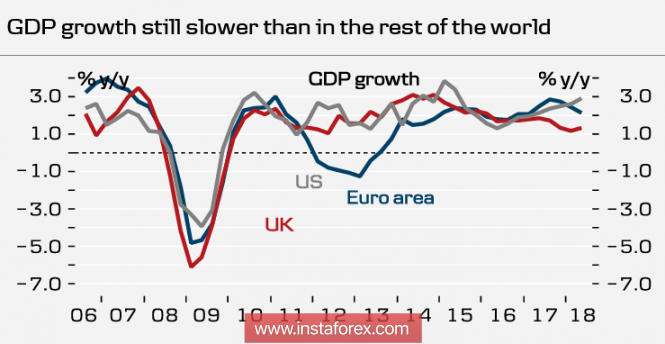 While the markets are set for another increase in May 2019, after Britain officially leaves the EU. The Brexit theme will remain dominant in the coming months, and the pound may maintain high volatility as too many factors look vague.

Pound bulls are determined decisively, in the next few days an attempt may be made to break the downtrend, for which the bulls will try to gain a foothold above the previous high of 1.3172 with a follow-up target at 1.3363.