The euro and the pound will continue to decline

The euro continues to trade in a range while the markets cannot find a reason to leave it. The latest macroeconomic data comes in line with expectations, suggesting that the preparation of markets for the ECDC meeting to be held next week will also take place without shocks.

For the first time since February 2017, consumer inflation in the eurozone has reached the level of 2%, which is quite consistent with the objectives of the ECB. At the same time, there is a danger that this indicator is at a limit beyond which inflation will no longer rise, as it was largely due to the increase in energy prices (annual growth of 8%) and food products (annual growth of 2.7%), the root inflation rate without accounting for these parameters was only 0.9%, and not reaching to the forecast 1.0%. 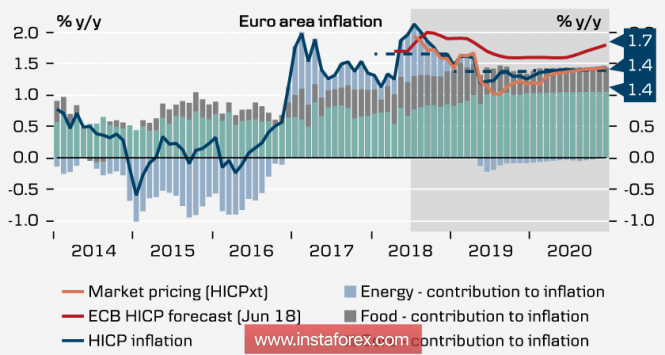 Markets are very neutral about the upcoming ECB meeting and do not expect any revelations from it. The plan for an exit from a soft monetary policy was determined at the June meeting, and it is unlikely that any significant adjustments will be made to it.

The purchase of assets should be completed by the end of this year. There is no reason to assume that changes will be made to this plan. In any case, no public comments on the asset repurchase from the bank’s management sounded. It may be explained how to interpret the phrase that rates will remain stable “at least until the summer of 2019”. This may introduce some nervousness into the current euro quotes, but in general, there is no reason to expect strong moves, as the macroeconomic prospects remain stable.

On Monday, the European Commission will publish a preliminary consumer confidence index for July. On Tuesday, Markit will provide preliminary data on the PMI in the euro area. Taking into account some deceleration of activity, PMI indexes may fall, which may lead to weakening of the EUR/USD pair by 20 / 40p. Today, the euro is likely to decline. The support for 1.1575 and its achievement at the end of the day is expected.

The pound is once again under serious pressure with a number of fundamental reasons contributing to the renewal of the 10-month minimum the GBP/USD pair. It is unclear what could prevent further decline.

Most published macroeconomic indicators show a slowdown in activity. The retail sales unexpectedly declined by 0.5% in June, while the growth was expected to be at 0.4%. Producer prices also showed noticeably worse expectations, consumer price growth remained stable at 2.4%, but it is largely driven by rising energy prices, while the growth of the base index slowed from 2.1% to 1.9%. 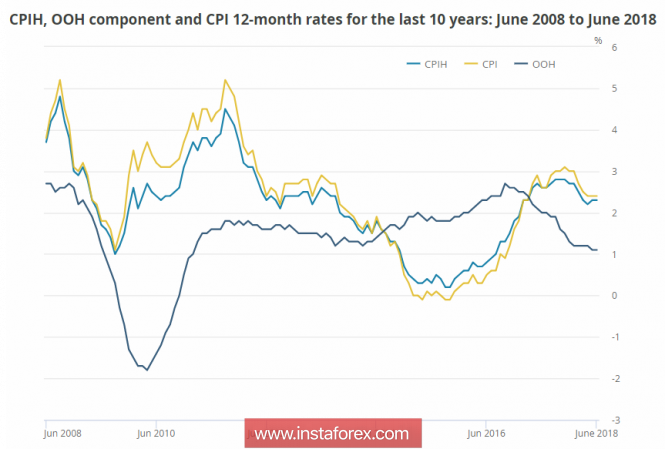 Of course, the current level of inflation is consistent with the Bank of England’s target but the dynamics are negative and therefore, the probability of an increase in the rate at a meeting in August is again under question.

Before the release of the UK from the EU, there were only 8 months but still satisfied with all parties, the plan is still there. There are growing fears that the output will be tough, which now requires the preparation of appropriate insurance mechanisms. The EU countries, according to Reuters, can lose up to 250 billion euros and a million jobs. There is still no consensus on the losses of the UK, which is reflected in the lack of consensus within the ruling party.

Today, NIESR will present an estimate of GDP growth in June, but it is unlikely to add a positive to the pound. The GBPUSD pair will remain under pressure, following the results of the week. Another update of the low and a decline to 1.2940 is not ruled out.

Oil prices remain stable after the report of the OPEC + monitoring committee on the fulfillment of the terms of the deal in June by 12%. The overall assessment of the prospects of the agreement is positive. The participating countries are not going to go beyond the agreements, which will eventually stabilize prices and keep them from falling. In the absence of significant news, oil will continue to trade in the range. An attempt to grow to 74.15 dollars per barrel is not ruled out for Brent.