The euro is stable ahead of the ECB meeting

The key event in the eurozone this week is the ECB meeting on Thursday, July 26. This meeting is considered to be a passing one, the likelihood of any changes is minimal, but surprises are still possible, and they will primarily concern the wording regarding the timing of maintaining current rates.

The ECB directly links the first increase to achieving a consistently high inflation rate, and at the moment this parameter is rather negative – growth is primarily due to rising prices for petroleum products, the root value is about 1%, which is too low to begin the cycle of tightening. At the same time, maintaining a dovish rhetoric is increasingly difficult, as with each new meeting, the spread of returns between dollar and euro assets is increasing, the spread of yields between assets in dollars and euros is growing, and delaying the process can accelerate the migration of capitals from the eurozone.

There is another factor that may push Draghi to take a more hawkish position. The inversion of the yield curve in the United States is approaching, the dynamics are obvious. Three times in recent decades, the inversion preceded a new recession, and if the current trend continues, the new inversion will come in half a year, and there before the recession at hand. 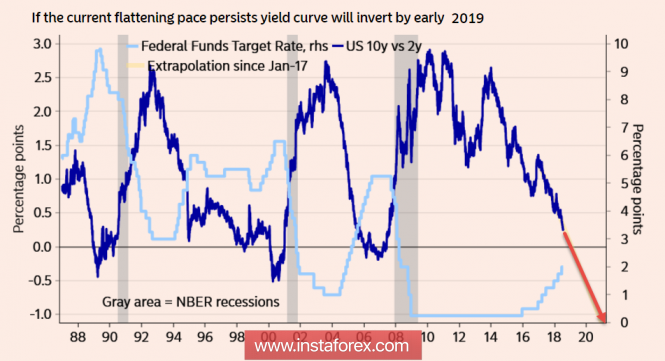 Accordingly, the ECB is in an ambiguous position – it can begin a cycle of tightening just as a new recession is indicated. This paradoxical conclusion from the current situation does not allow the ECB to publicly announce the expected steps, because they can be canceled at any time.

Thus, there are two scenarios for the euro, and both of them are bad, and there is a badly hidden split in the bank’s management regarding the future actions of the regulator. Accordingly, the focus is shifted to the press conference of Draghi following the meeting, which may lead to the growth of the euro, since Draghi is unlikely to avoid adding hawkish notes to his position.

Since the ECB meeting is not expected to publish important macroeconomic data (the release of the PMI Markit report is unlikely to be able to take markets out of balance on Wednesday), EUR/USD trading will most likely take place in a range close to current levels. After the meeting, it is possible to consolidate the euro above 1.1790 and try to test 1.1853, but it is unlikely that it will be successful, the dollar in the main currency pair remains favorable.

The pound is under pressure due to another political crisis that threatens to lead to the resignation of the May government, as well as due to weak economic data. At the same time, the Bank of England meeting is holding it back from falling, with a 70% probability that the key rate will be raised. The GBPUSD will continue to trade in a wide range of 1.3050 / 3190, the probability of an exit for which until the end of the week is low.

Oil prices again attempt to grow after Saudi Arabia has lowered its tone regarding output growth under pressure from a number of OPEC countries and the lack of real growth in demand. The threat of “excess” oil entering the market has decreased, which led to the stabilization of prices. Brent traded on Tuesday above $73 per barrel, by the end of the week can rise above 74.