The growth of panic moods is inevitable

On the eve of the main event of the week, the report on employment in the US for August, the statistics coming from overseas remain quite contradictory.

The growth of business activity in the sector, according to IHS Markit, slowed in August to a minimum for 5 months, the index was 54.8p against 55.2p a month earlier. Procurement prices in the service sector continued to grow, but the growth rate was minimal for 5 months, employment growth was reduced to a minimum in 7 months.

Employment in the private sector, according to the ADP Research Institute, showed a minimal increase in 10 months in August, the result was significantly worse than forecasts. 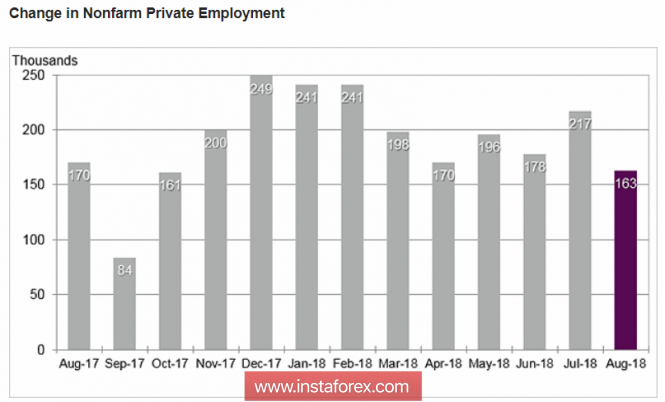 Two weak releases did not have a noticeable impact on the dollar since all the negative was more than offset by the ISM report on activity in the services sector, which again proved significantly better than the similar study from Markit. In August, the index rose from 55.7p to 58.5p, which significantly exceeded all forecasts, the index of new orders at 60.4p, which indicates the expansion of the US economy and good forecasts for GDP growth in the 3rd quarter.

US stock markets are traded in the red zone, investors are increasingly worried that stock indexes have already formed the top and go into a deep correction.

One of the main reasons for the fear is the escalation of the US trade wars with the main partners. It is expected that in the near future Donald Trump can announce the introduction of additional duties on Chinese imports amounting to 200 billion dollars, all the necessary formal steps have already been passed. Concerning the future agreement, NAFTA also is not present while any clearness, Canada does not wish to agree on offered to it conditions which fairly considers as predatory.

The first information appeared that the next one in Japan, which is included in the list of the largest US trade partners. Trump’s efforts to fill the budget have not yet led to success, the trade deficit is growing, the situation will begin to worsen as oil production in the United States begins an inevitable decline on the background of depletion of shale deposits. The yen has responded with strengthening, the world is actually preparing for a new wave of escape from risk.

Today at 13.30 London time, a report on the labor market for August will be published, optimistic forecasts, especially against the backdrop of the Fed’s recent calculations of a decline in the rate of growth of jobs in full-time employment to 60-80 thousand per month. The focus will be on the growth rate of average wages as a key factor in inflation expectations in the Fed’s calculations (the so-called “Phillips rule”).

Today, we will publish a report on GDP growth for the second quarter, but it is unlikely that it will have any noticeable impact on the market. Next week, the ECB will hold a meeting on monetary policy, which is expected to announce a decrease in the volume of monthly purchases to 15 billion, any surprises are unlikely.

The situation in the euro area is calm, the economy is growing at a moderate pace, some inflation surge is explained by rising energy prices, which is confirmed by the stability of the root inflation, the forecasts do not imply serious changes.

Today, the euro will continue to trade in the lateral range in anticipation of new benchmarks, growth is limited to 1.1665, support 1.1585, out of range is possible in case of a noticeable difference between the labor report and forecasts.

The ruble has updated at least since April 2016 against the backdrop of political aggression against Russia on the part of the UK, the Conservatives are looking for a way to hold power against the backdrop of the frankly failed results of the Brexit talks, as well as in anticipation of a new portion of sanctions from the US. Correction of oil prices and a general increase in panic sentiment in emerging markets also contributed to the decline in the Russian currency.

The hurricane in the Gulf of Mexico was noticeably weaker than the market feared, so attention will again be shifted to the latest API report, which looks positive, oil will be traded today with a slight decrease.

Despite the fact that there are no internal reasons for weakening the ruble, there is no reason to expect a return to the range of 60-65. The stock market should leave foreign speculative capital, stabilization is possible only after the introduction of additional measures by the government, as Russian Finance Minister Siluanov said yesterday.