The growth of tension against the European currencies

The euro continues to decline, but at the heart of it is not the economic problems of the eurozone, but the next growth of political risks. Preliminary assessment of GDP growth in the euro area in 2Q increased from 2.1% to 2.2% while industrial production growth as of June is 2.5%, which is slightly lower than forecast, but the trend is still rising.

The aggravation of the crisis in Turkey as a boomerang is hitting the prospects of the European economy, and so experiencing considerable difficulties after the unilateral withdrawal of the US from the Iranian nuclear deal and the government crisis in Italy. Turkey follows Russia to get rid of dollars, and Italian banks, which traditionally take a significant part in financing a projector in Turkey. They can suffer first.

Despite the fact that US President Trump has already publicly expressed displeasure at the too high dollar rate, he is still clearly benefiting from the trade war. 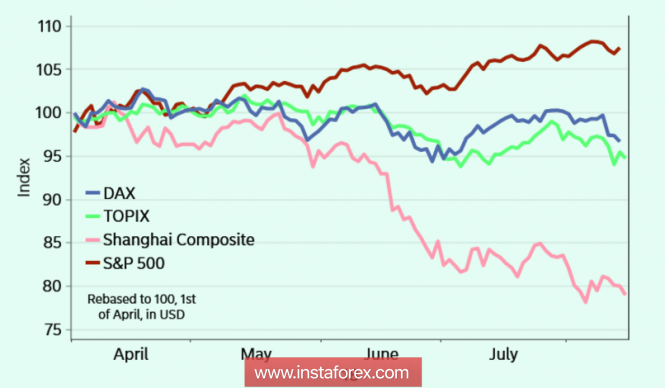 This factor, at the same time, looks positive only at a short distance – by the end of the year, a noticeable strengthening of the dollar index and tightening of financial conditions as a result of the policy of the Fed will have the opposite effect. Actually, the EURUSD rate was ready for a reversal after a rather noticeable drop, and, most likely, it will happen by the end of the year. However, at the current stage of the reasons for the growth of the euro there is practically none. The resolution of the US trade negotiations with the main partners to its own advantage lies in the strategy of the Trump administration as one of the key parameters for stabilizing the growing budget deficit, and there is nowhere to retreat from the US, and therefore, the current tension will intensify, despite attempts to find a compromise through negotiations.

The euro will remain under pressure until the end of the week. On Friday, an inflation report will be published for the month of July. Forecasts are neutral, experts are not expecting surprises, and the euro is unlikely to find a positive driver for itself. The euro will be traded in a range with gravity to the lower border, probably a decline in results for up to 1.1320 with an attempt to go below yesterday’s low until the end of the week.

For the pound, the current week looks quite saturated. New data may change the prospects for another rate hike by the Bank of England. At the moment, the market is dominated by the assumption about the next step of the BoE will make in May 2019. Until that moment, we will observe the changes in the economy. Obviously, these changes should be positive, but recent data indicate that expectations may be overestimated.

The unemployment rate in April-June fell to 4%, this is the minimum for the past 43 years. At the same time, fewer projections were created for new jobs, and the dynamics of the average wage are quite alarming. 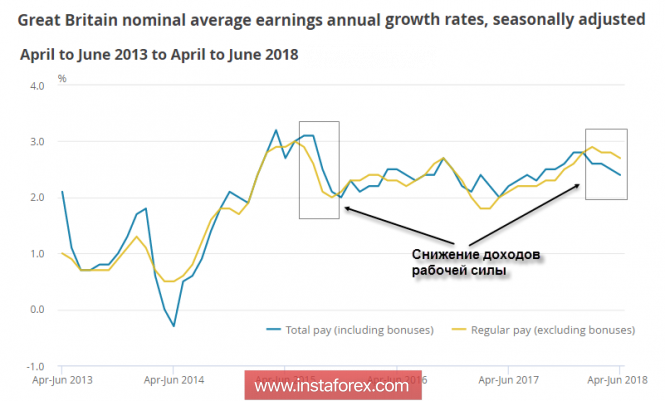 Exactly three years ago, the situation was much the same. Markets were waiting for the Bank of England to tighten monetary policy but a sharp drop in wage growth for August-October led to a pause of more than two years. Now, the growth in incomes is not so pronounced, but it’s enough to question the inflation forecasts, which means the BoE’s ability to withstand the cycle of increase without adjusting is there.

A number of indirect data contribute to the growth of fears. The growth of the retail price index in July turned out to be worse than the forecasts, producer prices showed zero growth at all, which may indicate problems with the growth of orders. Inflation growth rate of 2.5% over the last year is in line with the forecasts. This has somewhat reduced the negative but expectations have worsened, and now most experts are waiting for a slowdown in prices until the end of this year.

Today, a report on retail sales in July was published, which may slightly change the emphasis, but it is unlikely to provide the pound with appreciable support. The decline is highly likely to continue, corrective growth is limited to resistance at 1.2770, after which sales may resume to update the recent low at 1.2660.