The markets froze in anticipation of the FOMC meeting

On Monday, the next US measures to equalize the trade balance with China came into effect. Duties on Chinese imports of $ 200 billion increased by 10%, from January 1, 2019, they will be increased to 25%, while the products of American companies, in particular, Apple, are excluded from the duties.

China is expected to raise duties on the remaining 60 billion imports from the US, and further symmetric measures are excluded. China refused to hold trade talks, and if at the upcoming UN summit, Trump and Xi Jinping do not try to find a compromise solution, the escalation of trade wars is inevitable.

Despite the fact that China’s main macroeconomic indicators are at high levels (industrial growth in August was 6.1%, retail sales 9.0%), fears are still mounting. On Friday, a report on PMI will be published, given the strong fall of the Shanghai Composite due to trade wars and the obvious correlation of the index with PMI, we can expect a slowdown in business activity and, as a result, gradual cooling of the Chinese economy as a whole. These fears make the priority the scenarios of further slowing global trade and the growth of defensive assets, that is, the current surge in interest in risk is not market-based and is likely to last for a long time.

The dollar is under different pressure. The policy of the Fed leads to its appreciation due to the growing spread of yields, while at the same time, the weakness of the fundamental economic indicators cannot be concealed, which raises doubts about the effectiveness of the measures taken by the Trump administration.

The euro received support after the publication of the monthly report CESifo on the dynamics of the business climate in Germany. Despite a slight decline in the September indices relative to August, all three components of the index were better than expected, which may indicate a more confident state of Europe’s largest economy than recently predicted by experts.

The index still remains above the long-term average, a small decline in the manufacturing sector is offset by high expectations of positive changes, growth in trade, construction, and services. 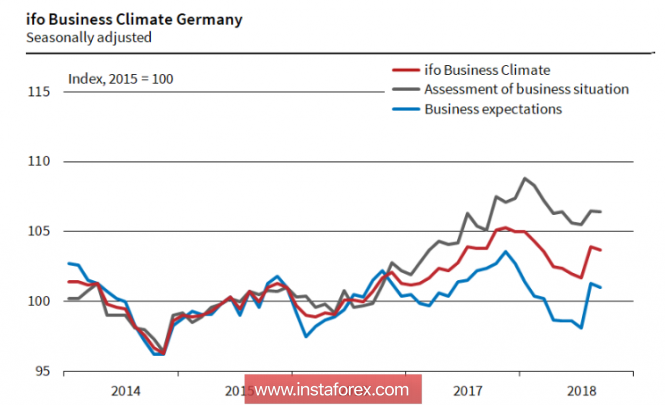 ECB President Mario Draghi spoke on Monday at the European Parliament with an obviously hawkish speech. In his opinion, the basic inflation in the euro area in the coming months will intensify against the background of the expected acceleration of wage growth. According to him, the pace of the salary increase agreed with employers was 2.2% in the second quarter, which is significantly higher than 1.7% a quarter earlier and 1.5% in 2017.

Thus, Draghi unambiguously states that a slight decline in inflation in August was temporary. Despite the fact that the market expectations for the rate have not changed and the markets have not been the first to rise before the end of the summer of 2019, the overall assessment of the situation becomes more hawkish, which provides the euro with support in the long term. Last week, the main economist of the ECB Praet and member of the board of directors Coeure spoke in a similar vein, and Nowotny went even further by announcing that the monetary policy should be tightened earlier than planned and there is no need to continue stimulation in the eurozone.

The currency pair EUR / USD on Draghi’s comments rose above 1.18, aggressive growth is constrained by expectations following the FOMC meeting on Wednesday, so strong growth is unlikely to occur until the announcement of the results, but the long-term outlook for EUR / USD is revised upwards.

Today, the most likely trading is in the sideways support range of 1.1715, the probable growth is limited to the level of 1.1775.

The EU summit was expected to fail. The positions of the parties did not close, but, on the contrary, were even more divided. May refused to accept updated proposals on the border with Ireland and tried to insist on her position, which the EU had previously declared unacceptable.

The threat of Britain’s withdrawal from the EU without any agreement has increased, as May announced publicly at a press conference on Friday. The pound has gone down, and now, its chances of continued growth look weak. Before the FOMC meeting, the pound is unlikely to find any driver for the movement. Today, the trade will continue in the lateral range, limited by the maximum and minimum week 1.3055 – 1.3166.