The pound came under fire from the White house

When Donald trump begins to comment on what is happening in the market or in any particular country, investors are nervous. His interview with the Sun newspaper shocked fans of the British pound. The US President criticized Theresa May’s plan of the agreement with the EU and called the retired Foreign Minister Boris Johnson a great politician, which reduced the likelihood of strengthening trade relations between London and Washington and forced the GBP/USD quotes to collapse to the bottom of the 31st figure. After the meeting between Trump and May, it turned out that the press was misinterpreted by the information, and the owner of the White House was looking forward to Brexit, then to go on rapprochement with the UK.

Politics remains to be the joker who at any moment can appear on the table and change the balance of power in the currency pairs connected with the sterling. The pound reacted positively to the resignation of supporters of the hard Brexit Boris Johnson and David Davis, but as new layoffs in the government arose, the question emerged as to whether Theresa May will be able to maintain her post? And then such revelations from Donald Trump! I would venture to assume that he was dissatisfied with the content of the program of the British Prime Minister, seriously expecting the break of many ties. In fact, the draft agreement is a document in which only the financial services sector will suffer from divorce. Otherwise, it makes only minor adjustments to the existing relationship.

Deutsche Bank believes that investors will soon cease to be nervous and will find the strength to buy the GBP/USD. The bank forecasts the pair to grow to 1.41 by the end of this year, which contrasts with the median estimate of Bloomberg experts (1.34). As the main argument in favor of its “bullish” position Deutsche Bank leads soft Brexit. 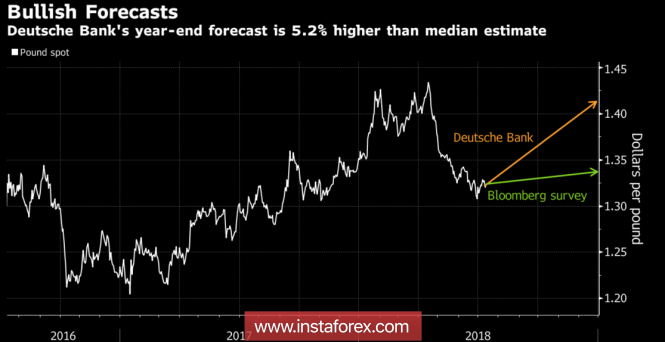 The second important driver of the change in the pound’s quotes is the normalization of the monetary policy of the BoE. Sterling will have a very interesting week in terms of the economic calendar, which allows us to call it the most interesting G10 currency. Releases of data on the labor market, inflation, retail sales and the size of net borrowing of the private sector will keep fans of the “sterling” in suspense.

In general, the situation has much in common with the May events, when the futures market estimated the probability of an increase in the repo rate at the Bank of England’s next meeting at 80% or above. This is the figure that appears now in relation to the August meeting of the Committee on Monetary Policy. Then the “dovish” rhetoric of Mark Carney and the block of disappointing statistics became the starting point of the GBP/USD peak. Since then, the pair has lost about 9%, the head of the BoE has replaced anger to mercy, and the number of “hawkish” MPC, ready to tighten monetary policy even tomorrow, increased from two to three.

Technically, after reaching the target by 88.6% on the “Double top” pattern, a natural rebound in the direction of 23.6%, 38.2% and 50% of the CD wave followed. The development of the “bullish” attack on GBP/USD is facilitated by the implementation of the “Wolfe Wave” model. 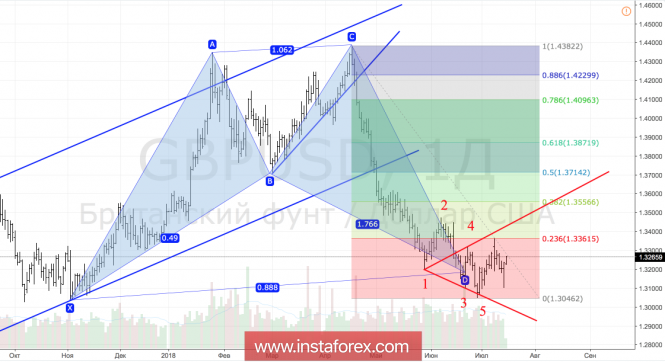