The pound gets rid of the ballast

If you get rid of the ballast, it’ll be a lot more fun. Over the past few months, the policy has restrained the offensive outbursts of the bulls on the GBP/USD. While most investors sleep and see the pound rise significantly higher, political risks prevent them from starting to form long positions. In past years, the Conservative Party conference invariably turned into a collapse of the sterling, and Theresa May’s statement about the impasse in negotiations with Brussels leads its fans to sad arguments.

This time, nothing extraordinary happened at the Tory’s meeting. The prime minister was not allowed to doubt the leadership. At the same time, rumors about the advancement of the Irish border issue led to a decrease in the EUR/GBP to the area of 3-month lows. Investors are playing on the contrast: while the fire of the political crisis in Italy is only heating up, in Britain, on the contrary, everything is moving towards the conclusion of an agreement. According to Reuters, London’s new proposal to Brussels avoids large-scale checks on the border with Ireland, which signals progress in the negotiations.

Not the slightest role in strengthening the pound is played by the growth of the yield of British bonds to the area of 2-year highs. If the UK manages to achieve an orderly exit from the EU, the risks of continuing the Bank of England’s monetary policy normalization cycle will increase. At the same time, the threat of an acceleration in inflation forces investors to flee from local debt obligations. If we add to this London’s desire to take a step from fiscal consolidation to GDP acceleration and the potential growth of bond issuance associated with it, it becomes clear why the debt market rates are steadily moving upwards. Their increase raises the attractiveness of British assets, boosts demand for them and contributes to the revaluation of the sterling. 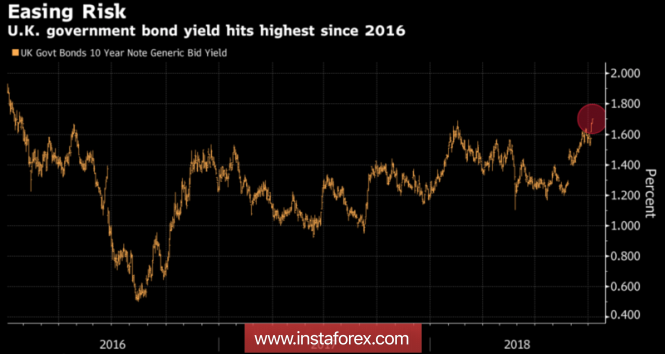 At the same time, there are always two currencies in any pair, so the success of one of them does not necessarily lead to a shift in a certain direction. The dollar also looks very attractive at the moment. The futures market increased the likelihood of three acts of monetary tightening of the Federal Reserve in 2019 from 40% to 42%, the duration of employment growth outside the agricultural sector does not get tired of rewriting records (96 consecutive months), and unemployment fell to a low of almost half a century. Against this background, the rise in the yield of US Treasury bonds to the peak in the spring of 2011 should not be surprising.

In the week to October 12, investors working with the GBP/USD will monitor the political situation in Britain, as well as the release of data on GDP of the UK for June-August and US inflation. In May-July, the economy of the United Kingdom accelerated to 0.6%, and if it continues in the same spirit, the pound will receive an additional trump card.

Technically, after a rollback to 50% of the AD wave of the “Bat” pattern, and the rebound from the lower limit of the upward trading channel, the “bulls” on the GBP/USD launched an attack in order to update the September high. If this happens, the chances of implementing the target by 161.8% on the AB=CD pattern will increase. 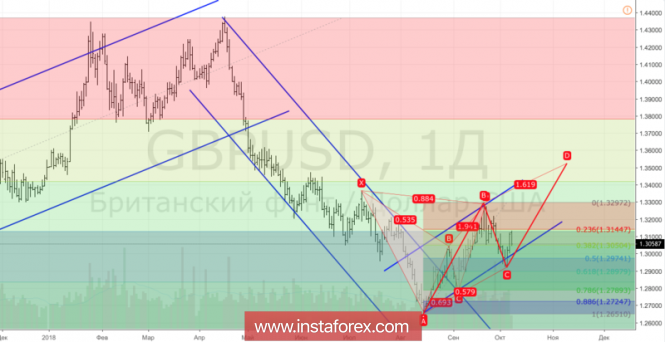