The pound got a break-point

The conciliatory rhetoric of Michel Barnier and the strong statistics on Britain’s GDP for May-July allowed the pound to seriously impede the US dollar gaining momentum. The fastest growth in the average wage in the US since 2009 has increased the likelihood of overclocking inflation and aggressive monetary restriction of the Fed, which inspired the “bears” for GBP / USD to attack. Their opponents could find answers. As a result, the sterling was not far from the psychologically important $ 1.3 mark.

The main negotiator from the EU noted that it was open to the idea of simplifying control at the border with Ireland and in general, in Theresa May’s plan, there are many useful things. She did not say that the submitted document should be unequivocally rejected. Moreover, Bloomberg, referring to competent sources who wished to remain anonymous, said that Barnier had told the Austrian Chancellor that the Brexit agreement was ready for 90%. Markets are sensitive to the news about the conditions for the withdrawal of Britain from the European Union, after all, according to a poll of experts from Reuters, the GBP / USD pair will slip by 8% in the absence of a deal between Brussels and London and will grow by 6% if there is a compromise.

Support for the pound was provided by the Office of National Statistics of Albion. In May-July, the economy accelerated from 0.4% in April-June to 0.6%, which is the strongest quarterly growth during the year and strengthens the position of the Bank of England. The fact is that the regulator previously claimed that the GDP slowdown at the beginning of the year is a temporary phenomenon, and in the future, the indicator will develop the previous speed. Theoretically, this means that the timing of the next increase in the REPO rate should have moved to an earlier period than the market expects. In fact, the unfavorable political landscape has moved the date of the continuation of the cycle of normalization of monetary policy from November 2019 to February 2020, which restrains the offensive fervor of the bulls in the GBP / USD.

Dynamics of GDP in Britain The situation may change for the better for the fans of sterling, if the statistics on the labor market of Foggy Albion will please, and the Bank of England will be marked by “hawkish” rhetoric at the meeting on September 13. According to the forecasts of Bloomberg experts, unemployment will remain at the previous level of 4%, the minimum for several decades, employment will increase by 27 thousand, and the average salary will be dispersed from 2.7% to 2.8% y / y. The gradual recovery of GDP after a sluggish start, a strong labor market and the potential acceleration of inflation create the prerequisites for the continuation of the cycle of normalization of the BoE monetary policy. If, of course, Brexit does not lay a pig.

At the same time, I do not think that an improvement in the political background and macrostatistics in Britain will allow the “bulls” in the GBP / USD to advance to 1.33-1.34 in September. This requires a loss of interest in the US dollar, which is still hard to believe. The most likely scenario is consolidation in the range of 1.27-1.32.

Technically, on the daily GBP / USD chart, the pattern “Splash and Regiment” is implemented. Breaking the top of the “shelf” near 1.3035 will increase the risks of continuing the rally in the direction of the target by 88.6% in the “Bat” pattern. 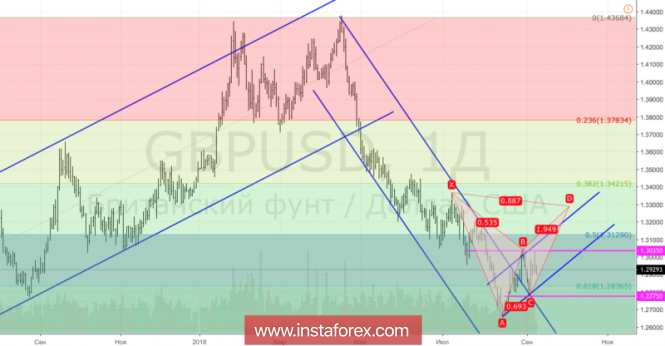