The pound has reached a dead end

Can the central bank normalize monetary and credit policy, macroeconomic statistics improve, and the currency fall? Maybe if the weight is attached to its feet by politics. It would seem that the positive signals from GDP, average wages and retail sales should have given the pound an acceleration, because the timing of the next increase in the REPO rate has shifted from early 2020 to summer 2019. Before the Austrian EU summit, everything went smoothly: the GBP/USD pair rose to a two-month high, but Theresa May’s speech in Salzburg confused the “bulls” with all the cards.

On the eve of the meeting of representatives of the European Union, the parties were full of optimism. Brussels was determined to provide London with preferential conditions unknown to any other country, Michel Barnier argued that he was ready to work day and night to make the deal happen, and Germany said that it would take the plan in general terms, in order to discuss the details later on. It would seem that everything is going to ensure that, as a last resort, by November, the parties will sign an agreement. However, the EU’s rejection of Theresa May’s plan has caused heated criticism from the British prime minister. In her opinion, the relationship reached a deadlock, and the UK is better off left without a deal than sign a bad agreement. What is the reason for May’s violent aggression? It is unlikely that she was enraged by the reluctance of Brussels to approve the program. Most likely, the head of government needed to get support within the country.

As a result of the sharp speech of the British prime minister, the GBP/USD pair lost about 1.5%, which was its worst daily dynamics in the last 15 months. National Australia Bank claims that 2.5% of the rally of the trade-weighted sterling went too far, its volatility reached its highest level since February, and MUFG notes that the trading range for the analyzed pair can be very wide – from 1.15 to 1.45 – depending on the hard, soft Brexit or lack of agreement on the divorce of the UK with the EU.

The dynamics of the volatility of the pound

The strengthening of political risks and the growth of volatility are important factors that constrain the strengthening of the pound. The higher the volatility of quotations, the less the desire of non-residents to buy British assets. London, on the other hand, needs to finance the current account deficit, so a decrease in capital inflows should be seen as a “bearish” factor for the sterling.

It should be taken into account that there are always two currencies in any pair. And the peak of the GBP/USD pair at the end of the week to September 21 is due, among other things, to a slight recovery of the US dollar. Investors expect an increase in the federal funds rate following the September FOMC meeting, China’s reluctance to negotiate with the United States speaks of the escalation of the trade conflict, while the main opponent of the dollar in the face of the euro is burdened by weak statistics on business activity and political problems in Italy.

Technically, there is a struggle for an important level of 1,312. If victory is celebrated by “bears,” the risk of a pullback after reaching the target of 88.6% for the the “Bat” pattern will increase. On the contrary, the victory of the bulls will create prerequisites for the continuation of the GBP/USD rally. 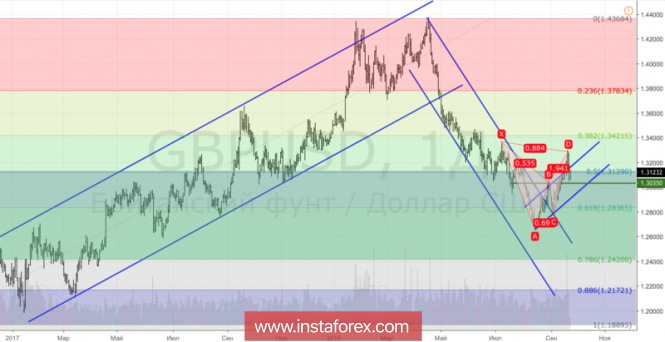