The pound went down

Despite the increase in the REPO rate to 0.75% in the monetary policy normalization cycle and the acceleration of the British economy from 0.2% in the first quarter to 0.4% q/q in the second quarter, the sterling is the worst performer among the G10 currencies in the previous three months. Its losses against the US dollar exceed 5%, and the GBP/USD pair went to the 13-month low. What is it? Have factors such as improved health in the national economy and monetary tightening ceased to work?

The reasons for the weakness of the pound should be sought in an unfavorable political background. Both official London and ordinary consumers are increasingly talking about the prospects of divorce from the EU without a deal. The Minister of International Trade of Great Britain Fox said that the probability of such a scenario is 60%, the head of the Bank of England Mark Carney said that the chances are “unpleasantly high”, and Prime Minister Theresa May said that it will activate preparations for such an outcome. Unsurprisingly, Google’s queries from Britain have reached peak levels. 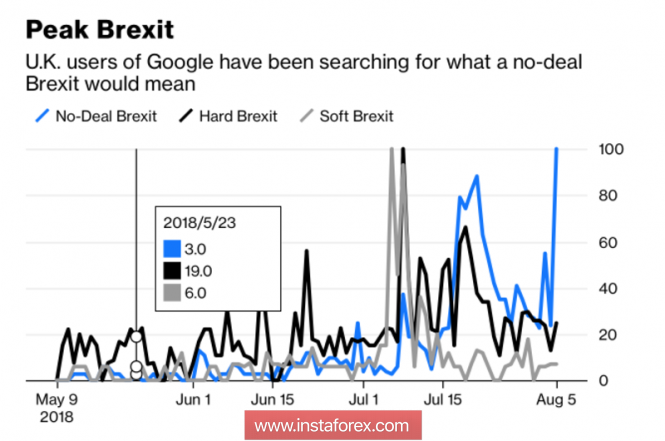 Additional pressure on sterling creates Morgan Stanley’s recommendations to its customers to insure the risks of the UK leaving the EU without a deal. As a result, the difference between the premium on options to buy and sell the pound (reversal risks) has reached its lowest level since February 2017.

Dynamics of the pound reversal risks 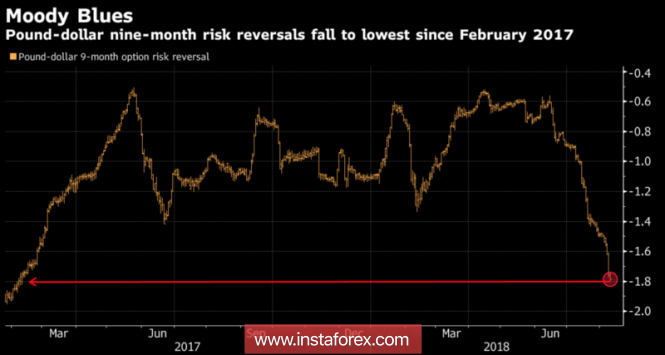 The unfavorable political climate has an impact on business activity and economic growth, so it is not surprising that the talk about the lack of an agreement with Brussels has forced some investors to talk about the possibility of reducing the REPO rate in 2019. Everything will depend on macroeconomic statistics on the UK, so a week full of important releases by August 17 may be decisive for it. The publication of reports on the labor market and inflation, together with data on retail sales will clarify the prospects of the sterling. However, as is known, in any pair there are always two currencies, therefore, one should not discount the factor of a confident US dollar inflow, of course, should not be discarded.

The “greenback” reaps the fruits of Donald Trump’s protectionist policy. The constant threats of import duties and the expansion of import duties contribute to the fall of purchasing managers ‘ indices and to the slowdown of the world’s largest economies in the face of the Eurozone and China. At the same time, US GDP, emboldened by the large-scale stimulus, rises to 4.1% q/q in the second quarter. The dollar benefits not only from the different speeds of the economy, but also from the process of capital flight to safe haven assets. In this regard, the problems weighed down by the sanctions of Turkey and Russia have an impact not only on the EUR/USD, but also on the GBP/USD.

Technically, the “bears” on the analyzed pair managed to storm the important support at 1.2835 and continue the downward campaign in the direction of 78.6% and 88.6% of the last long-term upward wave. 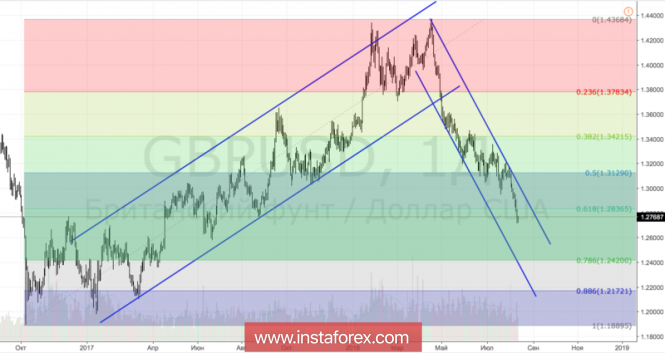