The rise of the Canadian dollar: NAFTA is dead – long live USMCA

“NAFTA is dead – long live USMCA” – this is how we can describe the events of the past weekend. Despite pessimistic forecasts, mutual accusations and threats, Washington and Ottawa were able to negotiate and conclude a new trade agreement. The negotiations lasted for more than two years and were supposed to be completed in the spring of this year, on the eve of the presidential elections in Mexico. But the dialogue not only dragged on, but was under threat of failure several times, with all the ensuing consequences. Therefore, the news of reaching a compromise solution caused a stir – especially among the traders of the USD/CAD pair.

Let me remind you that at the end of last week the “Loonie” was in a very depressed state, approaching the borders of the 31st figure. Donald Trump once again threatened to impose duties on the import of cars and spare parts of the Canadians, saying that Canada “behaves badly”. He also noted that the United States is dissatisfied with the Canadian negotiators, as their position is “not constructive”. In addition, Trump refused to meet with Canadian Prime Minister Justin Trudeau at the UN General Assembly, after which rumors that Washington was preparing to withdraw from NAFTA unilaterally began to spread on the market. Experts even called the tentative timing of this step – November-December of this year, that is, after the elections to Congress. 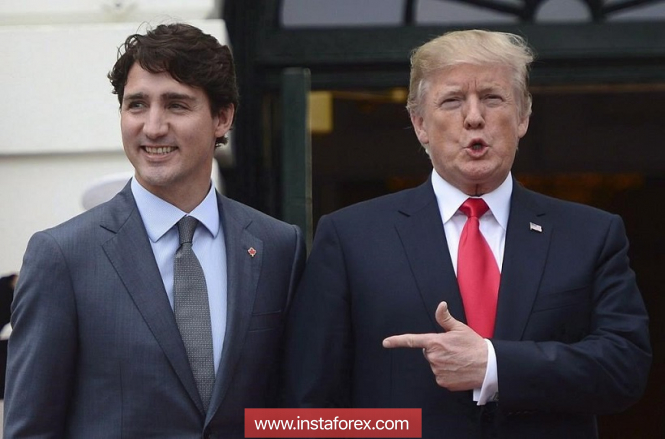 Therefore, when signals began to appear on Friday evening in the American and Canadian press that Washington and Ottawa did agree, the USD/CAD pair fell 150 points. It was really unexpected news, given all the previous rhetoric of the parties. Officials later confirmed this information by issuing a joint statement. The Canadian dollar reacted accordingly, starting the trading week with a downward gap (1.2850) paired with the US currency.

It is worth noting that we know almost nothing about the agreement. At the moment, it is known that the parties decided to abandon the name NAFTA, replacing it with USMCA (United States — Mexico — Canada Agreement, that is, the “US, Mexico and Canada Agreement”). Donald Trump insisted on it in the summer when he reached a compromise with the Mexicans. This is a purely political move, since even during the election campaign he promised to reconsider or completely abandon NAFTA: now this agreement, which lasted 24 years, has gone down in history, and Trump can record this fact into his political asset.

However, a “change of sign” is insignificant and only a step for image. Much more important is the essence of new trade relations. According to sources of the Canadian press, now we are talking only about the key agreements, and officially the deal will be signed within the next two months (most likely – until November 6, that is, before the elections to the US Congress).

What the parties agreed on is not known for certain. Insider information suggests that American producers will now have expanded access to the Canadian dairy market. This is an important point, as the lobby of producers of “milk” have a great influence in the Canadian political structure, and this particular point of the agreement has long been a stumbling block.

As a compromise, the parties did not abandon the system for regulating anti-dumping disputes. Canada has consistently opposed the deletion of the article on the settlement of trade disputes in a special arbitration court, as Ottawa believes that local producers in timber and pulp and paper production may suffer from this. The White House for two years insisted on the exclusion of this item, but eventually decided to sacrifice it, because in exchange a substantial compensation was received.

By and large, in the context of the foreign exchange market, it is not so important what points of the transaction were sacrificed by the parties in order to reach a compromise. For traders of the USD/CAD pair, it is enough that the key points are agreed and the threat of new duties has passed. Now market participants can fully focus on the prospects of monetary policy, as representatives of the Bank of Canada have repeatedly hinted at another rate hike before the end of this year.

Data on GDP growth, published last Friday, can only strengthen the “hawkish” position of the members of the Canadian regulator. The July figure came out better than expected: on a monthly basis, the indicator rose to 0.2% (with a forecast of 0.1%), and on an annual basis – to 2.4% (with a forecast of 2.2%). The decline in August inflation is unlikely to change the rhetoric of the Canadian central bank, as this fact was expected (the consumer price index fell to -0.1%), and retail sales jumped by 0.3%.

All this suggests that at one of the two remaining meetings this year (October 24 and December 5), the Canadian regulator may raise the rate for the third time, providing support to the Canadian currency.

The perspective of the downward direction of the USD/CAD pair is also confirmed by the technical picture: on the daily and weekly chart, the pair is on the bottom line of the Bollinger Bands indicator. This indicates a downward trend. On D1, the pair is also under the Kumo cloud and under all the lines of the Ichimoku Kinko Hyo indicator – another selling point. The support level is the lower limit of the Kumo cloud on the weekly chart, which corresponds to the price of 1.2750. The resistance level corresponds to the upper line of the above Kumo cloud – this is 1.2920.