The trend on the dollar is questioned

The CFTC report, published on Friday, showed that large players are beginning to cautiously cut long positions in the US dollar. Slightly in demand are currencies of commodity countries, slightly smaller, the franc and the yen. But in general, the trend is clearly seen, the peak demand for the dollar, which fell in mid-August, may have already passed.

There are several reasons, but the main one is the uncertainty about the future plans of the Fed. Directly the wave of dollar sales was provoked by the head of the Federal Reserve Service Powell in his speech in Jackson-Hole, but his speech only summed up a number of signs indicating a weakening rather than served as their cause. At the same time, macroeconomic indicators are increasingly evident, which indicate that further dollar growth is being questioned.

On Tuesday, the ISM index for production will be published in August, negative forecasts, the index is expected to decrease from 58.1p to 57.7p, but an even slowdown is expected on the specific inflation acceleration index, which estimates production, orders, supplies and reserves forecasts – 70.2p against 73.2p a month earlier. 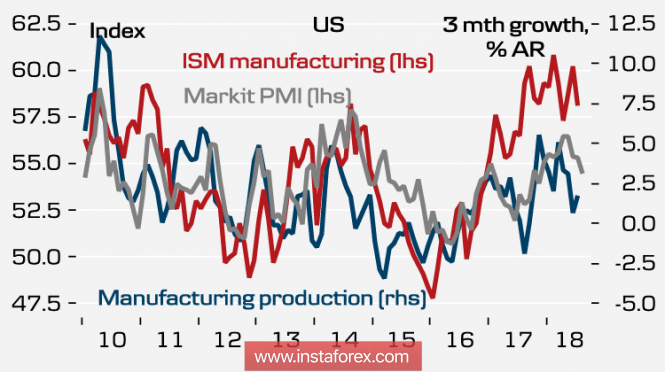 The probable reduction of the ISM along with the fall in the consumer confidence index of the Michigan Consumer Sentiment Index to 96.2p against 97.9p a month earlier indicates an increase in concerns about the ability of the US economy to safely withstand the cycle of rate hikes planned by the Fed. As you know, the period of growth rates was always accompanied in the subsequent recession and a new cycle of decline, but between the end of the period of growth rates and a new recession usually took several years.

The financial environment of the United States is growing fears that this time the recession can come much faster. Inflationary pressure is noticeably lower than forecasted, the yields of the Tips bonds are at semi-annual lows, and there are no signs of renewed growth. This means that the business sees the risks of reducing inflation in the short term. Along with these fears, there is a danger of slowing the growth of the labor market due to the risk of escalating trade wars.

On Wednesday, the public hearings on the second round of tariffs for Chinese exports amounting to $ 200 billion expire. The market has no doubt that Trump will announce the introduction of a new package shortly after the hearing, as China, unlike the more compliant EU or Mexico, it is not going to make unilateral concessions. As long as China stands the trade war without much damage to itself – the levels of business activity in the manufacturing and servant industries, published on Friday, showed a slight increase in August, remaining above 50p, indicating continuation of the expansion. The PMI Caixin Index, released on Monday morning, declined slightly from 50.8p to 50.6p, the volume of export orders recovered.

On Monday, in connection with the government holiday, banks in the US are closed, which will reduce volatility. The basic movements need to wait no earlier than Tuesday.

Significant macroeconomic news from the eurozone this week is not expected, on Monday the PMI index in the industrial sector will be published, neutral expectations, on Tuesday – producer price index in July. Inflationary expectations in the euro area remain stable, so the euro is likely to be traded in a narrow range and expect news from the US labor market at the end of the week.

Euro during the day with a high probability remains above support 1.1584, the possible growth is limited by resistance 1.1685.

The Brexit theme again begins to dominate as the pound’s main driver. Today, after a long break, the House of Commons returns to work, we should wait for a lively discussion between the parliament and the May government. Pound, most likely, will look insecure, because, from the point of view of macroeconomics, it does not have much to rely on.

On Monday, the PMI index for the manufacturing sector will be published, on Tuesday a hearing of the inflation report will be held in the parliament, comments of the representatives of the Bank of England may increase volatility. Pound during the day will be traded in the lateral range, the probability of staying above support 1.29 high, but in the thin market in the second half of the day surprises are possible.