The US economy before the threat of deceleration

The US dollar updated the maximum against the euro and the pound last week, taking advantage of rising tensions in several regions. When will the rally be completed?

Most of the factors that markets take into account are still in favor of the dollar. These include the normalization of the Fed’s policy, turmoil in Turkey and Italy, which exert strong pressure on the euro, a trade war with China. While these factors are working, the dollar will remain out of the competition. At the same time, a number of internal indicators indicate that the growth momentum is slowing down, for example, the PMI Philadelphia index fell in August to 11.9p against 25.7p a month earlier, this is a 21-month low, and the US industrial production index still will not reach the 2007 level. 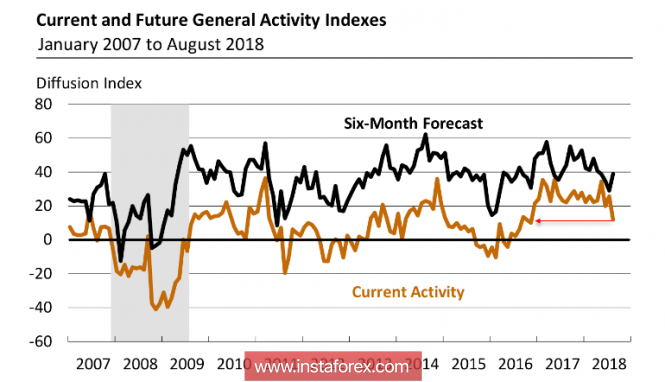 The US GDP growth is above 2% for 5 consecutive quarters, the main driver of growth in private consumption. The dollar is growing based on the factors mentioned, but it should be borne in mind that part of its growth is based on expectations of positive US results from sanctions against the US, Turkey, Russia and the trade war with China. The markets assumed that a short period of indignation and bargaining would lead to Trump’s being able to obtain favorable terms for the US on all the points indicated, since that was always the case before. However, recent events show that this time the result will not be so obvious since almost all the designated countries intend to go further than expected in defending their rights.

Concerning the trade war with China, the expectations are pessimistic. On Thursday, August 23, additional restrictive import measures amounting to $ 16 billion will come into force, and by September 5 public hearings regarding an additional 200 billion will come to an end. The likelihood of the introduction of new restrictive measures and a tough response from China is high, while China there are not so many opportunities for an adequate response, one of which is a reduction in transactions with the dollar in external economic calculations, which will lead to the beginning of sales by China of American Treasuries. Such a scenario, which until recently seemed unthinkable, begins to take on the real shape and will lead to the strongest problems in the US in the formation of the budget.

So, by autumn we should wait for the slowdown in the growth of the US economy. Inflationary expectations are falling, the dynamics of inflation-protected bonds are negative, their yields are in the region of 3-month lows and continue to fall. Forecasts for ISM are negative, it is expected that business activity will fall, which is facilitated not only by an increase in Fed rates but also cyclical activity. 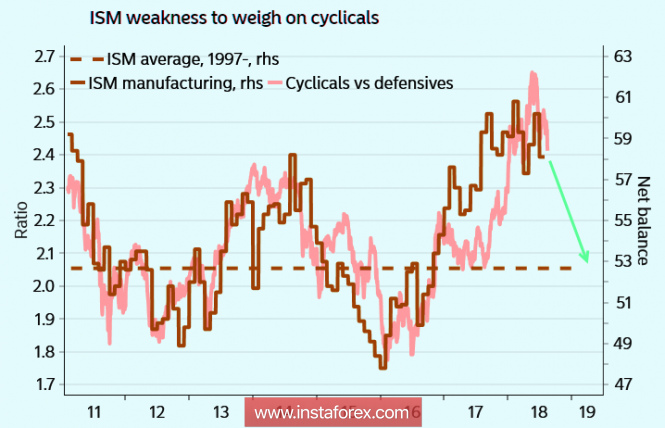 Thus, part of the drivers that supported the growth of the dollar in recent months, may be won back. Support for growth will have two factors – the policy of the Federal Reserve and general political tension. This may not be enough, so you need to proceed from the fact that the dollar index may begin to form the top and will gradually roll back from the peaks achieved. This conclusion is facilitated by the insider that the Fed may stop at a 2.5% rate in the increased cycle, rather than 3.0%, as previously planned.

On Wednesday, the minutes of the Fed meeting will be published on August 1, some hawkish rhetoric is expected to be tightened, but the market reaction is unlikely to be significant.

Significant macroeconomic news on the euro is not, trade is largely determined by technical factors, which indicate an increased likelihood of a small corrective growth. The support level of 1.1390, during the day growth to 1.1470 is possible.

The pound at the opening of the week does not have a noticeable direction, it is likely that the trade will be in the range with a slight downward trend. Support 1.2710, most likely, it will stand today, the growth is limited to the level of 1.2790.