The yen is bending its line

Trade negotiations between the US and China a few hours before the expansion of the package of import duties on the supply of goods from China to the States, the entry into force of new sanctions against Russia and the traditional meeting of the world’s leading bankers in Jackson Hole. What could be more interesting for safe havens? And although the status of the yen, franc, and gold as reliable assets has recently been questioned, many understand that the main culprit of this is the US dollar. The escalation of geopolitical conflicts increases the demand of investors for the “American” and treasury bonds, which does not allow its competitors to prove themselves.

The yen is a kind of black sheep G10, as unlike other currencies it is not going to throw a white flag against the US dollar. She holds the first place in the list of the best performers since the beginning of the year despite the divergence in the monetary policy of the Bank of Japan and the Fed. The yield differential between the 2-year US and Japanese land bonds has reached its highest level for more than a decade, while the pair USD / JPY has frozen in consolidation in the range of 110-111.5. 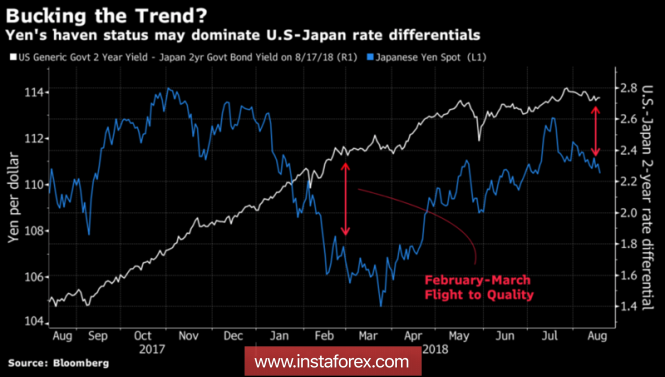 However, there is an opinion in the market that the factor of different vectors of monetary policy of central banks is already taken into account in the quotations of the pair being analyzed, while the strengthening of the dollar under the influence of trade wars does not pass unnoticed. Indeed, since the coming to power of BoJ Haruhiko Kuroda, USD / JPY has risen from 76 to the current 110.5, and rumors about the start of the Japanese normalization amuse the ego of the “bears”. At the same time, the US currency benefits from trade frictions between the US and China. Money flows into the US debt market, and the hope that the protectionism of Donald Trump will improve the state of foreign trade boils down the self-esteem of “bulls” at the USD index.

If you deprive the US dollar of such trumps as the rapid development of the economy and trade wars, the yen can get the largest preferences among the G10 currencies on a favorable geopolitical background. Despite the optimistic forecast from the Federal Reserve Bank of Atlanta, which sees that US GDP in the third quarter will grow by 4.3% after 4.1% q / q in the second, the fading effect of tax reform, tightening of the Fed’s monetary policy and financial conditions, rising borrowing costs and revaluation can result in broken illusions. In this scenario, one should expect a correction of US stock indices, worsening global appetite for risk and growth in demand for safe-haven assets.

How long will the US dollar be supported by the factor of trade wars? It is doubtful that the conflicting parties quickly agreed. On the other hand, interest in the dollar is maintained as long as non-residents buy US treasury bonds. If the enraged Celestial Empire starts throwing them off, the situation will turn upside down. And the yen will be able to take advantage of the situation.

Technically, if the “bears” manage to keep the USD / JPY quotes below the upper limit of the downward trading channel and update the August low, the risks of continuing the peak in the direction of targeting by 88.6% on the “Shark” pattern will increase. 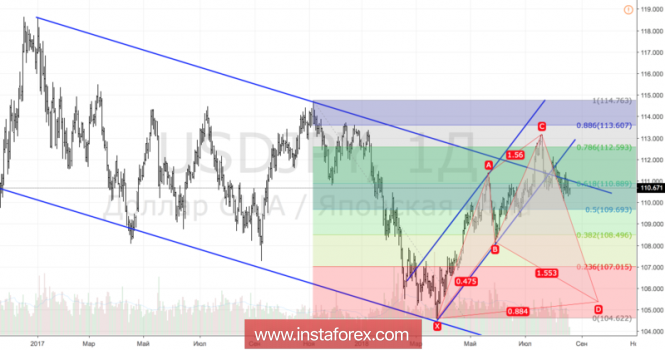