The yen retreats under the onslaught of the S&P 500

The escalation of the trade conflict between the US and China has returned investors’ interest to the question of why the asylum assets do not respond to the growth of geopolitical risks? Indeed, import duties lead to a slowdown in economic growth, and in such circumstances, investors prefer to reinsure and invest in reliable currencies. Nevertheless, neither the Japanese yen nor the Swiss franc received any special dividends because of Beijing’s announcement that tariffs for supplies of American goods to China would increase by $ 110 billion, equivalent to 85% of imports.

Attempts to look for the weakness of the yen against the US dollar in the divergence in monetary policy of the Fed and the Bank of Japan have grounds but do not explain the low sensitivity of the currency of the rising sun to geopolitics. Moreover, after the meeting of the Board of Governors, the volatility of the yen fell due to the transparent policy of the Central Bank. He is still going to expand the monetary base by £ 80 trillion a year, prefers negative rates and does not intend to make adjustments to the management strategy of the yield curve. Allegedly, I do not intend to. In fact, BoJ came out with a proposal for unlimited purchase of securities, when the rates for 10-year bonds reached the level of 0.145%. Previously, the regulator did not allow them to exceed the 0.1% mark.

The dynamics of the monthly volatility of the yen 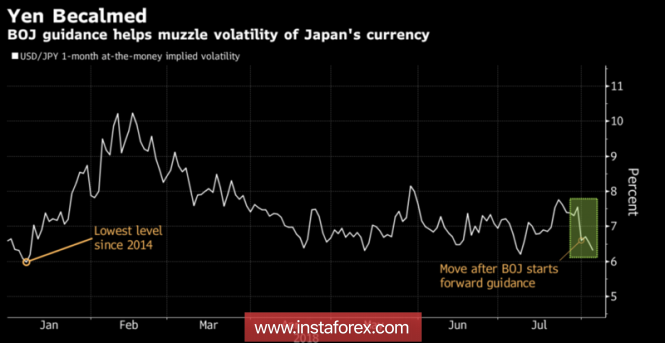 It is possible that BoJ did not focus investors’ attention on the important step because of concerns about the strengthening of the yen. The fact is that the increase in the yield of Japanese bonds will increase the risks of repatriation of capital to their homeland. Given the fact that investors from the Land of the Rising Sun have foreign debt obligations of $ 2.4 trillion, about 45% of which are issued in the US, the risks of the USD / JPY decline seem significant.

Personally, I’m not at all surprised at the Bank of Japan’s hidden intentions to make adjustments to the process of targeting the yield curve. Over the past 5 years, he expanded the monetary base three-fold, increased the share of bonds in the portfolio from 12% to 48%, but never did the most important thing – the inflation rate to the target of 2%.

The main reason, because of which the yen can not benefit from trade wars, must be sought in the differentiation of markets. If the US stock indices show the longest week-long winning streak since December, the fall of the Shanghai Composite has moved China from the second line in the list of the largest equity markets in the world. It was first taken from Japan in 2014. Thus, the factor of overclocking of the US economy under the influence of the fiscal stimulus outweighs the risks of slowing global GDP and contributes to the growth of USD / JPY.

The speed of American inflation is important for predicting the future dynamics of the pair. The higher it is, the greater the chances of four acts of monetary restriction of the Federal Reserve in 2018. In this respect, investors should closely monitor the release of data on the US CPI on August 10.

Technically, USD / JPY continues to be in the dead zone. If the “bears” manage to return quotations to the limits of the long-term downward channel, the chances for the realization of the pattern “Shark” will increase. 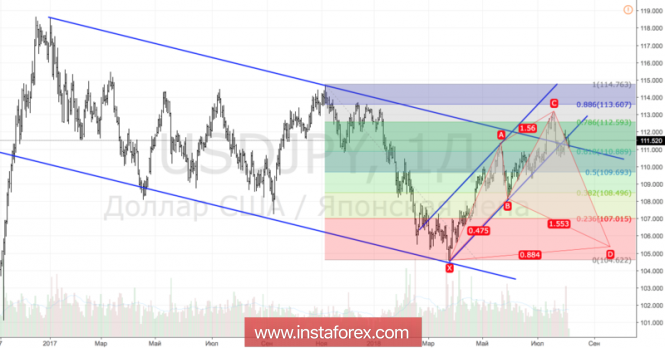