Theresa May will speak in Parliament today: the pound is waiting for a “storm of volatility”

Today in the afternoon (approximately at 15:30 London time) Theresa May will make an important statement in Parliament on the progress of the Brexit negotiation process. This is an unplanned speech of the British Parliament to the deputies – they knew nothing about it in the morning, so the pound reacted to this news with optimism.

The fact is that on Monday, the market began to actively discuss rumors that London and Brussels managed to reach a compromise on key and most difficult issues, and therefore the probability of signing a preliminary deal on October 17 has increased in many ways. Although the Ministry of Britain denied such information during the weekend, which provoked the downward gap on the GBP/USD pair. Now the pound is recovering its positions and even closed the gap – but at the same time it is extremely dangerous to trade this pair today: today, May will either increase the chances of a soft Brexit, or refute optimistic rumors.

In general, the closer the date of the official EU summit becomes, the louder is the information noise around the prospects of the “divorce process”. The complexity of the situation lies in the fact that the sources of information are decentralized, and, consequently, their messages often contradict each other. For example, insiders from Brussels assure journalists that the parties have found common ground and approached the deal. At the same time, British sources refute such optimism, stating stagnation in this matter. And vice versa. Therefore, contradictory signals appear in the media, to which the market has to react. 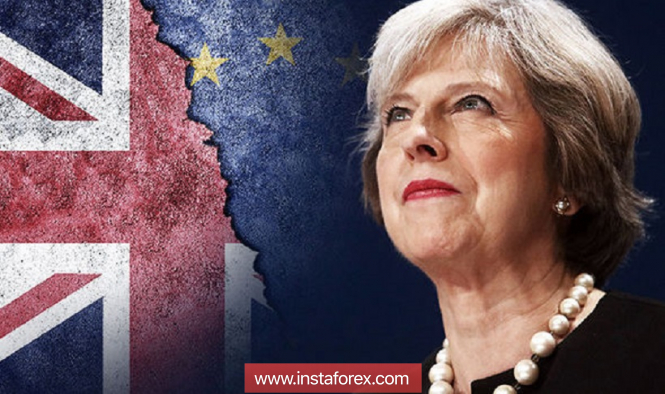 In the light of such confusion in information, the prime minister’s speech to the deputies is the most important event, especially since the summit is only a day and a half away. It is worth emphasizing that now there are rumors circulating among traders that are opposite in nature – some argue that the preliminary negotiations ended in failure, while others assure that the chances of concluding a deal on October 17-18 are still there. Theresa May can resolve this intrigue, thereby supporting or “knocking over ” the pound. In any case, high volatility with an unpredictable ending is expected for the GBP/USD pair.

The central problem continues to be the question of the Irish border. The British want to see the customs border between Northern Ireland and the Republic of Ireland after Brexit, while Brussels insists on maximum easing of the customs regime. EU negotiators even proposed to temporarily leave Britain in the customs union, but the British side refused this option. According to them, this scenario would be contrary to the basic principles of Brexit. However, among the working versions there were other options to minimize customs control, which were previously discussed by the negotiators.

Thus, Theresa May today can either state the failure of the preliminary talks, thereby raising the bar of importance of the upcoming summit, or report on reaching a compromise on the main issues, telling the deputies about the details of the agreements reached. Depending on what the prime minister will say, the pound will either strengthen by several hundred points or collapse by the same amount.

Given the importance of the upcoming events, macroeconomic releases will take a back seat, despite the fact that in the coming days key indicators of the British economy will be published. So, tomorrow we will learn the dynamics of the labor market in Britain, and on Wednesday – inflation indicators. The unemployment rate should remain at a record low of four percent, and the increase in the number of applications for unemployment benefits may fall to 4,000. Another important indicator – the growth of wages-should also show a positive trend, remaining at 2.6%.

But inflation will move away from the highs of August: according to most experts, the consumer price index will slow to 2.6%, and core inflation – to 2%. However, even if the above indices come out at the forecast level (not to mention exceeding the forecasts), this will indicate that the key economic indicators are in a remarkable form and the Bank of England can accelerate the process of tightening monetary policy next year. Naturally, given the “soft” Brexit.

Thus, Theresa May’s speech for today will either give impetus to the upward movement of the GBP/USD, or turn the pair towards the 29th figure. Technically, the pair is prone to growth – the price has closed the downward gap and is between the middle and upper lines of the Bollinger Bands indicator, and the Ichimoku Kinko Hyo indicator has formed a bullish “Parade of lines” signal. The closest resistance level is at 1.3275 – this is the upper line of the Bollinger Bands indicator on the daily chart. But the support level is the upper limit of the Kumo cloud on the same timeframe, which corresponds to the price of 1.3010. However, the technical parameters today are very conditional – Theresa May’s speech can break both powerful resistance and reliable support.