It is possible to say with all certainty that various mass media were banal. At first, they diligently dismissed the rumor that the Fed will not raise the refinancing rate, but after they were told that such statements contradict not only the expectations of investors who have long taken into account the tightening of monetary policy, but also the words of representatives of the Federal Commission on open market operations, there were even accusations that a number of media are trying to manipulate the market, so they had to urgently change their shoes in a jump and start broadcasting that the rate will increase, but the plans for further tightening of monetary policy will clearly be revised. As a result, the refinancing rate was raised from 2.0% to 2.25%, and Jerome Powell confidently said that the Fed is not abandoning its plans. So by the end of the year the rate will be raised one more time and three times next year. And while this is in full agreement with expectations that have long been embedded in the value of the dollar, the nervousness that was created by the media eventually led to the strengthening of the dollar. However, the greatest contribution to the strengthening of the dollar is made by the ECB policy, as there is no certainty that Mario Draghi will fulfill his promises regarding the quantitative easing program.

Separately, you should also pay attention to yesterday’s statistics, as it favored the growth of the dollar. Thus, the number of approved mortgage loans in the UK decreased from 39,619 to 39,402. But in the US, sales of new homes increased by 3.5%.

Today, data on consumer lending in Europe will be released, the growth rate of which should slow down from 3.0% to 2.9%, so that the single European currency does not have much reason to grow. In the US, the final GDP data for the second quarter is released, which should confirm the acceleration of economic growth from 2.6% to 2.9%. In addition, in the US, orders for durable goods are expected to increase by as much as 2.0%, and this is after their reduction by 1.7%. So expectations for the dollar are quite optimistic.

The euro/dollar currency pair still managed to break the level of 1.1720 on the general news background, drawing a pulse downward move. It is likely to assume that the current mood will remain in the direction of 1,1680/1,1650, followed by a return of a period of stagnation. 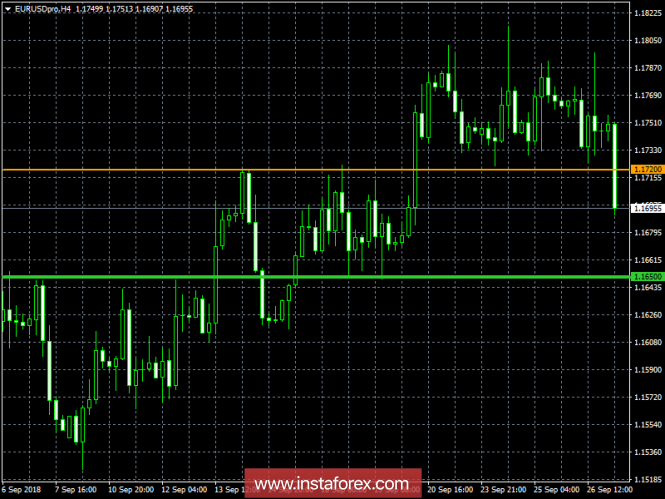 The pound/dollar currency pair after the euro/dollar pair demonstrates a downward trend, increasing volatility. It is likely to assume a decline to 1.3090/1.3070, after which a stagnation with a rollback is possible. 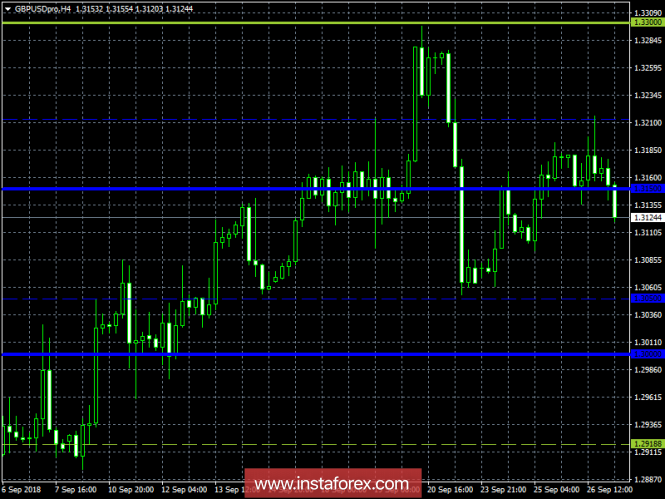