After the representatives of the European Union announced their readiness to offer the UK some amazing trade agreement, Theresa May sharply stated that the United Kingdom would not make any concessions in the negotiations with Europe. And nobody has ever seen any concrete proposals from Europe. And yesterday, in a number of mass agitation and misinformation, rumors arose that Britain and Germany are ready to give up a number of mutual demands in order to reach an agreement on the withdrawal of the United Kingdom from the European Union. This news led to the instant growth of the pound and the single European currency. At the same time, the pound itself had a reason for growth due to an increase in the business activity index in the services sector from 53.5 to 54.3. But the European currency did not have such reasons. The growth rate of retail sales slowed from 1.5% to 1.1%, which, however, was somewhat smoothed by the growth of the index of business activity in the services sector from 54.2 to 54.4. Due to the growth of the index of business activity in the service sector, the composite business activity index also increased from 54.3 to 54.5. But the value of retail sales is much greater. So it’s no wonder that already at the very end of the day there were signs of a rebound, at least over a single European currency.

Today, all attention is focused on US statistics, which will precede tomorrow’s publication of the report of the US Department of Labor. ADP data on employment growth may show a slowdown in the rate of its growth from 219 thousand to 190 thousand, which is quite good, since, given the demographic composition of the population, employment should grow by about 200 thousand per month. The number of applications for unemployment benefits should increase by 3 thousand. It is expected that the number of initial applications for unemployment benefits will increase by 1,000, and the number of applications for another 2,000. But the changes are not significant, so they will slightly affect the value of the dollar. The index of business activity in the service sector should be reduced from 56.0 to 55.2, and the composite index from 55.7 to 55.0. And this is not so happy, especially as production orders can be reduced by 0.6%. In general, the forecasts for US statistics are quite sad, but the market will wait for specifics about the arrangements between Britain and Germany. If there is no explanation, most likely, the dollar will be strengthened, despite relatively weak statistics. 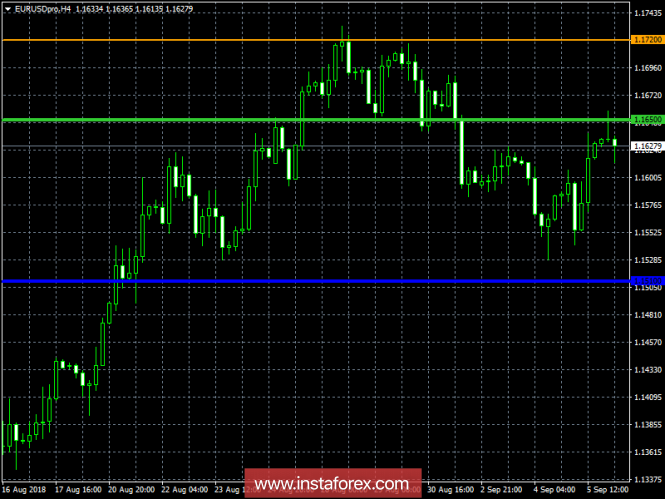