Although the USA celebrated Columbus Day yesterday and the Americans rested, the dollar resumed its growth. This is partly due to the continued market reaction to the problems of Italy caused by disputes over the budget deficit, public debt, as well as talk about the rejection of the single European currency. But there were also real reasons for weakening the euro, since the growth of industrial production in Germany was replaced by a recession. A month ago, the German industry grew by 1.5%, and now it shows a decline of 0.1%. Thus, given the weight of Germany, one does not have to hope for the growth of industry in Europe as a whole. And if the German economy has such problems, the ECB will most likely extend the program of quantitative easing.

Today, data on Germany’s foreign trade has been released, and although the trade balance surplus has increased from 15.9 billion euros to 18.3 billion euros, there are no many reasons for joy. The fact is that the trade surplus could increase only by reducing imports by 2.7%, while exports declined by 0.1%. No more interesting data comes out today, but the performance of Charles Evans may have an impact on the market. The fact is that from tomorrow, the data on inflation in the USA will start to appear, and its growth is expected. If the Fed representative focuses on this issue in conjunction with the tightening of the monetary policy of the American Central Bank, then all doubts about the rate of increase in the refinancing rate will be removed.

The euro / dollar currency pair continued its downward movement, fixing below the range of 1.1510 / 1.1550. Now, the quotation fluctuates around the value of 1.1460, where it has previously felt a temporary support. It is likely to assume further fluctuations in the region of 1.1460 / 1.1440. 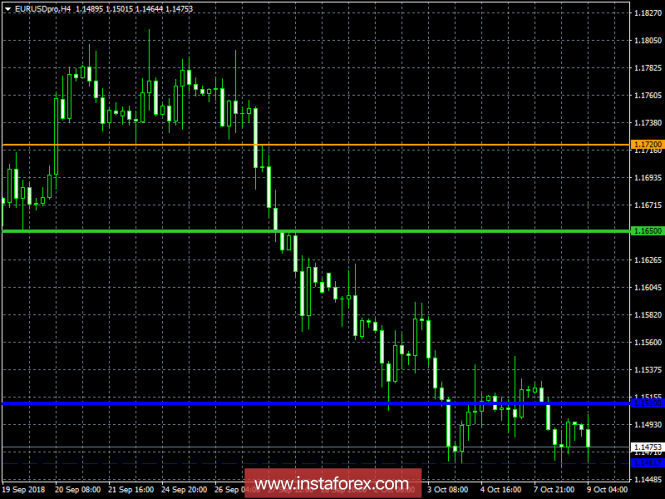