The euro continued to decline against the US dollar in the morning of Monday, August 6, amid the lack of important fundamental statistics, as well as expectations of further interest rate hikes in the United States.

Data on the sharp decline in orders in Germany put pressure on risky assets.

According to a report by the German Ministry of Economy, production orders in Germany declined sharply in June this year due to falling demand from countries outside the eurozone. This suggests that the current tensions in trade relations are already affecting the indicators, which will further exacerbate tensions between the US and the EU.

As indicated in the report, orders in the manufacturing sector in Germany in June 2018 fell by 4.0% compared to May, while economists had forecast a decline in orders by 0.5%. The ministry confirmed the fact that the uncertainty of the prospects of trade policy played a key role.

External orders in the German manufacturing sector in June fell by 4.7% compared to May, while domestic production orders decreased 2.8% compared to the previous month. 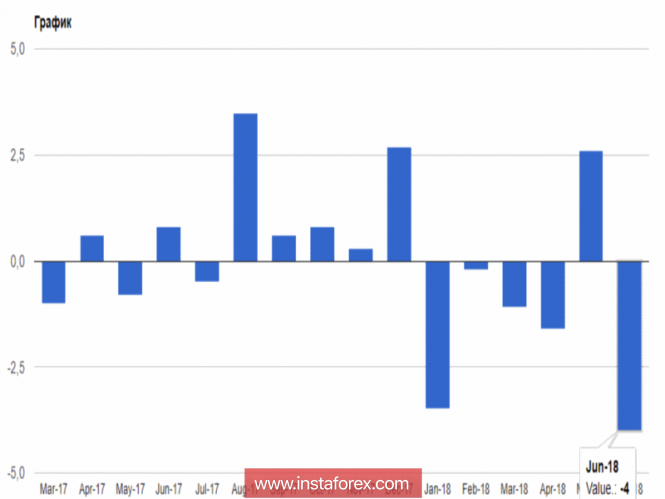 As I noted above, a particular decrease in orders was observed from countries that are not members of the eurozone. Here the figure fell by 5.9%. Compared to the same period of the previous year, orders in the German manufacturing sector decreased by 0.8%.

As for the technical picture of the EUR/USD pair, then, most likely, the pressure on the euro will continue. The breakthrough of support of 1.1530 will lead to new large sales in risky assets, with an exit to the lows of the month in the area of 1.1480 and 1.1440. The only hope of buyers in the short term is a return to the resistance of 1.1565, which will lead to an upward correction in the area of 1.16 and 1.1630.

The British pound continued to decline, ignoring the report on the volume of consumer lending in the UK, which in June this year has not changed compared to may. This shows that consumer spending will continue to grow in the future.

As for the technical picture of the GBP/USD pair, the recovery prospects are also quite far. Brexit and uncertainty with a further increase in interest rates in the UK continue to weigh on the pound.