The empty economic calendar of Monday forces traders to focus on near-market events and external fundamental background. After a tumultuous five days of trading, we expect a relatively boring week, if we consider only the list of expected macroeconomic releases.

However, this does not mean that there will be silence and low volatility in the market: on the eve of the autumn season, many processes of economic and political nature are activated. This is brexit, and discussion of new anti-Russian sanctions, and U.S.-China negotiations. But today we will talk about another process that lasts for the second year: we are talking about negotiations on the renegotiation of the North American Free Trade Agreement (NAFTA).

In June, US President Donald Trump has again threatened to unilaterally withdraw from this agreement at the same time proposing to split this transaction into two separate parts: the U.S.-Canada and U.S.-Mexico. However, Mexicans, and especially Canadians, categorically rejected the proposal. The fate of NAFTA was again in limbo with uncertain prospects. And if earlier the parties planned to renegotiate the deal before the Mexican presidential elections (which took place in July), now there are no temporary guidelines: the negotiations can last indefinitely, or until one of the participants (most likely the US) has no patience. 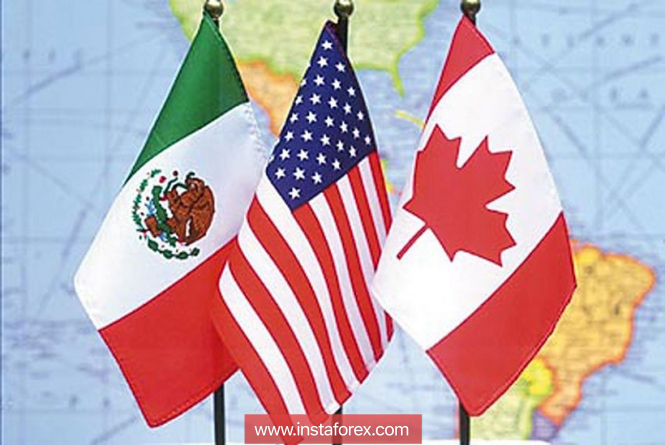 The situation has moved forward from a dead point after the opponent of the current head of state, Andres Obrador, unexpectedly won the elections in Mexico. He immediately developed a very warm relationship with Trump, which affected the negotiation process. Although Obrador promised to keep the deal with the three participants, the talks resumed in a bilateral format-without Canada. Rumors began circulating in the market that Mexico was preparing a separate agreement with Washington, after which the Canadian dollar was under considerable pressure. But, according to the Mexicans, the parties only want to settle all the controversial issues, and then return to the trilateral format.

And today, on August 27, we can learn the results of bilateral talks between Mexico and the United States. Donald Trump on Twitter announced a “major trade agreement” between the countries, adding that relations between Mexico city and Washington “are improving by the hour.” Here it is worth recalling that the US president mentions Canada exclusively in a negative way, especially after the G-7 meeting.

According to the information of the American press, Washington will announce today that an agreement has been reached with Mexico on NAFTA. According to sources of journalists, this step should have been done last week, but the parties needed more time to resolve the latest issues. According to the same insiders, the agreement will allow Canadians to join the further negotiation process.

With a high degree of probability, we can assume that the Canadian dollar will respond positively to this step – at least, if we talk about the initial reaction. Then everything will depend on the comments of the Canadian side. If Ottawa is skeptical about the prospects for the re-conclusion of the NAFTA, then all the optimism will come to naught, but if the parties start trilateral negotiations (which is more likely), the Canadian dollar will receive an additional reason for its growth.

The fact that NAFTA – one of the few “anchors”, which to some extent restrains the acceleration of the pace of tightening monetary policy in Canada. While other factors play in favor of further rate increases. In particular, the July inflation in Canada showed the strongest result since autumn of 2011. The labor market also shows a strengthening: the unemployment rate has dropped to 5.8%, and the number of employees increased by almost 55 thousand. Both indicators exceeded the forecast values, confirming the positive dynamics. The oil market is also showing signs of recovery – today a barrel of Brent crude oil is traded in the region of $76, and WTI – at $68.

Thus, the NAFTA Agreement is an important component for the growth of the Canadian currency in the medium and long term. If today this issue moves from the “dead point”, the reaction of the USD/CAD traders will be appropriate.

From the technical point of view, the pair is still in the downward movement. On the daily chart, the price is located between the middle and lower lines of the Bollinger Bands indicator and under all lines of the Ichimoku Kinko Hyo indicator, which formed a bearish signal “Parade of lines”. This suggests that in the medium term the price may fall to the lower line of Bollinger Bands, which corresponds to the level of 1.2950. But for this bears need to overcome the intermediate barrier-1.3000. If the news background regarding the prospects of NAFTA will be positive, the above-mentioned goals can be achieved in the coming days.