USD/CAD. Loonie weakens on the eve of the meeting of the Bank of Canada

The Canadian dollar continues to lose its position throughout the market amid disappointing news. The deal announced last week between the US and Canada did not take place, although both the US president and the Canadian prime minister expected the conclusion of a new agreement “from day to day”. Now, the estimated time frame stretched to the end of the year. Moreover, Donald Trump is ready to exclude Canada from the deal, thereby reducing the NAFTA format to two countries – the US and Mexico.

Unfortunately for the bears of the USD/CAD currency pair, the US-Canada talks did not succeed last week – now the September meeting of the Bank of Canada (which is scheduled for Wednesday) will be held under uncertainty. Traders fear that the regulator will soften its rhetoric and take a cautious stance, although most investors still hope for an interest rate hike in October. Tomorrow’s meeting, on the one hand, is a “pass-through”, because with 100 percent confidence we can say that no decisions will be made on it. But, on the other hand, the importance of this meeting cannot be overestimated, because the rhetoric of the regulator members will allow us to orient ourselves about the October actions.

If the central bank hints at a continuation of the pause, the Canadian dollar will continue to fall in price, and quite rapidly. Too high traders assessed the chances of a rate hike at the next meeting. A series of positive statistics allowed them to increase the likelihood of such a step: let me remind you that Canadian inflation showed record growth rates (the highest values in the last seven years), and unemployment continued to decline, gradually approaching the level of full employment (the last release was at the level of 5.8%).

In my opinion, the Bank of Canada will take a very cautious position on Wednesday. Although inflation and the labor market are showing positive dynamics, there are several reasons for some certain alertness – especially when it comes to raising rates. In particular, the latest published data on GDP growth unexpectedly disappointed traders. On a monthly basis, the indicator fell to zero, and in annual terms slowed to 2.4% (compared to 2.7% in may). This is also a cause for concern, as the Canadian regulator is now closely monitoring the impact (or rather, the consequences) of the double rate hike this year.

But the main problem now lies in US-Canadian trade relations. Canada does not want to go about with the United States, especially after the comments of Trump that the new agreement between the countries will be concluded on the terms of Washington – entirely. The president said this phrase unofficially and not in public, but in the presence of journalists who cited his words. According to the American press, this factor was the “last straw” for the Canadian side, after which Canadian Foreign Minister Chrystia Freeland stated that her country does not want to make concessions.concessions. 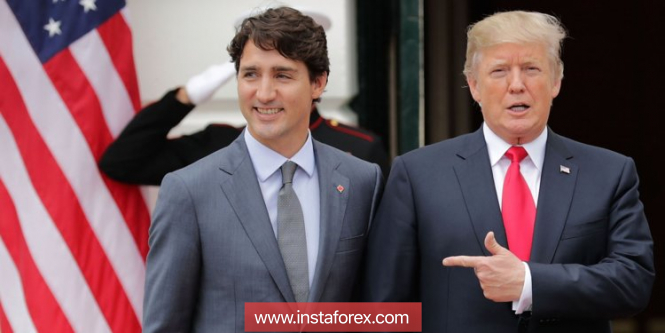 According to experts, this is not a matter of some phrases or grievances: the proposed conditions of Americans can create a political problem for the Canadian prime minister, whereas the next elections are expected next year. In addition, we must not forget about the influence of the Canadian lobby, in particular, in the field of dairy products. According to local journalists, milk producers have a great influence in the structure of Canadian politics, so the prime minister is afraid to go with them to confrontation, concluding a disadvantageous (for them) deal with the United States.

Donald Trump, in turn, has repeatedly spoken about unfair tariff conditions, including in the field of “milk”. Therefore, it is unlikely that the parties will avoid this issue, and the Canadians will either have to compromise, or expose themselves to the risk of new fees from the US. The US president this weekend again said that he was ready to exclude Canada from NAFTA, but judging by the reaction of the “loonie”, Canada is not ready for such a scenario, given the integration into the US economy.

Thus, tomorrow’s meeting of the Bank of Canada will be held under the sign of vague prospects for further relations between the main trading partners. The next round of US-Canada talks will take place only at the beginning of winter, so the Canadian regulator will have to choose a strategy for its behavior with this fact in mind. Excessive caution in the rhetoric of the regulator’s members will give the USD/CAD an upward impulse, and the pair will head to conquer the price of the highs of August.

Technically, the pair on the weekly chart is between the middle and upper lines of the Bollinger Bands indicator, as well as on the Tenkan-sen line of the Ichimoku Kinko Hyo indicator. This indicates the priority of the upward movement, but here it is necessary to wait for the consolidation of the price within the 31st figure. In this case, the Ichimoku Kinko Hyo indicator will form a bullish “Line Parade” signal, which will allow the pair bulls to go to the main resistance level of 1.3280 (the upper line of the Bollinger Bands on W1).