USD / CHF. Franc rises in price due to the weakness of the dollar

The September meeting of the Swiss Central Bank passed quietly and imperceptibly. The summit in Salzburg, US-China relations and events on the oil market overshadowed the meeting of the members of the Swiss regulator. Traders did not expect any unexpected moves from the SNB, and their expectations were fully justified. The central bank repeated the theses, voiced earlier, like a copy.

Let me remind you that three years ago, the SNB “untied” the euro from the national currency (which was at the level of 1.20) and since then considers the value of the franc too high in relation to other currencies, and especially to the single currency. The head of the SNB, Thomas Jordan, declares this regularly, at almost every meeting of the regulator. For the same reason, the Central Bank does not see any reason to tighten its current monetary policy. Experts believe that the SNB will not consider the possibility of changing its policy before the second half of 2020, therefore the meetings of the Swiss regulator may affect the dynamics of the franc only if Jordan decides to lower the interest rate further into the negative area. However, such a scenario is also unlikely. 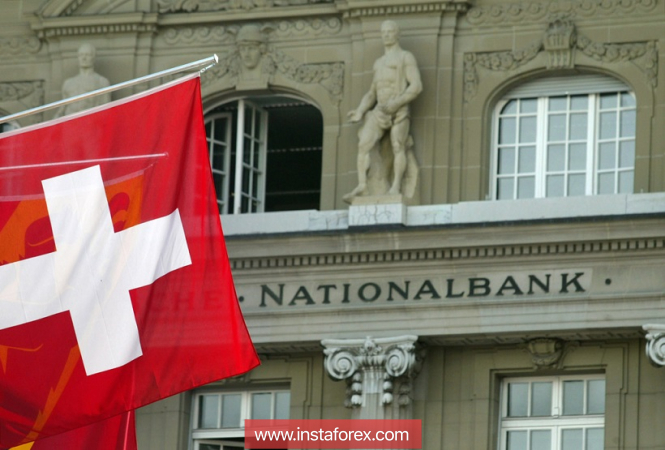 Despite such a nondescript information story, the pair USD / CHF fell more than a hundred points yesterday, and today, it continued to decline, having already reached the April lows. The phlegmatic SNB could not provide the franc with such impulse growth, so in this case, the reason is the general weakening of the dollar.

To be more precise, the initial reason for changing the interests of traders is to reduce the overall geopolitical tensions. An inter-Korean summit held in Pyongyang with the participation of North Korean leader Kim Jong-un and South Korean President Moon Jae-in neutralized concerns over the North Korean problem. The leaders of the two Koreas at the first meeting over the past 10 years were able to agree on many key issues. In particular, the profile ministers signed a military agreement (details of which, however, were not disclosed). In addition, North Korea has pledged to close and dismantle its nuclear test site, and in the presence of representatives of international organizations. In general, the meeting was held “in a warm and friendly atmosphere,” as they used to say in Soviet newspapers.

It should be recalled that on the eve of the inter-Korean summit, President Donald Trump accused China that he had withdrawn from the process of denuclearization of the Korean peninsula because of the trade war with the United States. But the outcome of the bilateral meeting suggests that the DPRK is still on the way to disarmament, despite earlier statements of the opposite nature. Beijing has a strong political influence on Pyongyang, so the “shadow of the Chinese” is certainly present here, and therefore Trump will have fewer reasons for criticizing the PRC in this context.

This fact reduced the demand for defensive assets, including the US dollar, which recently enjoys this status. The resumed talks between Washington and Ottawa on the renegotiation of the North American Free Trade Agreement (NAFTA) provided additional support to risky currencies to the detriment of defensive instruments. The US-China trade conflict also stopped supporting the growth of the dollar. The de facto market ignored the exchange of duties, thus puzzling many market participants.

Some of them say that traders were preparing for more stringent measures (in particular, to 25 percent duties, and not 10 percent), whereas the White House chose a relatively soft option. Other analysts see a deeper reason for the decline in the dollar. In their opinion, greenback is getting cheaper already because of the trade war, as the market saw risks for the growth of the American economy. Weak inflation data, paired with the ongoing trade conflict, can affect the resolve of the Fed’s members regarding the rate of interest rate increase. Secondary macroeconomic indicators, released this week (the volume of issued construction permits and sales of housing in the secondary market), also found themselves in the “red zone”, demonstrating a slowdown. Given the fact that the Fed’s September meeting will be held next week, the market begins to discuss possible scenarios of the development of events, and this fact also exerts pressure on the dollar.

However, the voiced options do not contradict and do not exclude each other. The dollar is under a certain pressure of the fundamental picture and only the “hawkish” meeting of the Federal Reserve is able to return the force of greenback for a large-scale restoration. Until then, the US currency will be vulnerable enough, including paired with the franc.

From a technical point of view, the situation is as follows. The pair on the daily chart is under the pressure of the southern trend, which is confirmed by the bearish signal “Parade of lines” indicator Ichimoku Kinko Hyo. Also, the downward motion vector is confirmed by the placement of the price on the bottom line of the indicator Bollinger Bands with attempts to test it. The medium-term target of the downward movement of the pair is the 0.9500 mark, which coincides with the lower boundary of the Kumo cloud on the weekly chart.