USD / JPY: Do not open deals on the eve of the weekend

The Japanese currency paired with the dollar strengthened during the Asian session by almost a hundred points, despite the release of weak data on the volume of industrial production in Japan. The indicator shows negative dynamics for the third month in a row due to a decrease in the level of exports of cars and steel. In addition, Japan still feels the consequences of the massive flood that occurred in mid-July.

However, the market completely ignored the internal Japanese statistics, focusing on the external fundamental background. The world is balancing on the brink of new economic conflicts, and the foreign exchange market, in turn, reacts quite sharply to the news flow. Yesterday’s interview of Donald Trump to one of the American news agencies made a lot of noise because of the loud statements of the odious politician. Traders still can not get used to the attacks of the American president, especially since Trump does not get tired of surprising the “versatility” of his criticism.

For example, yesterday the owner of the Oval Office took up arms against the WTO, threatening to withdraw from this organization. In his opinion, the World Trade Organization “very badly” refers to the US, so if this state of affairs does not change, he will have to take this step. By and large, Trump is not the first to criticize the WTO. In particular, in early August, he called the organization a “general disaster,” especially after China joined it. It is obvious that the US president will not abandon attempts to change the rules of trade in the world, therefore such threats will continue to sound, and it is possible that Trump will not subsequently pass from words to deeds. 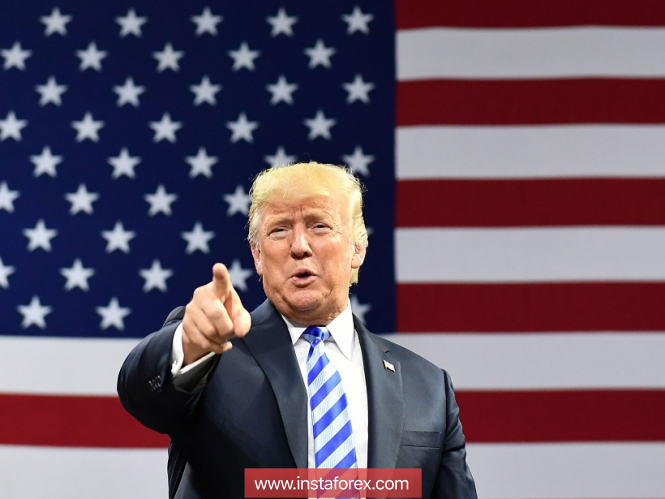 A new source of uncertainty (for the time being a hypothetical nature) has supported defensive assets, not only the Japanese currency, but also the Swiss franc, as well as gold, has grown in price. Moreover, the criticism of Trump concerned not only the WTO. The US president once again reported on problems in relations with Turkey, saying that he was “disappointed” in Recep Erdogan. Against the background of these words, the lyre continued to weaken against the dollar, thereby confirming the growing economic crisis in the country.

Another factor of nervousness, which affects the southern dynamics of the pair USD / JPY, is NAFTA. US-Canada talks on the renegotiation of the North American Free Trade Agreement ended yesterday with nothing, although the markets are eagerly waiting for a “reset” of relations between these countries. Moreover, both the American president and the Canadian prime minister actually announced a deal that should be concluded today.

But the absence yesterday of any breakthrough in the negotiations reduced the likelihood of such a quick resolution of the sore point. The possible failure of negotiations again provoked the growth of defensive assets (whereas the Canadian dollar, naturally, is weakening). After all, it’s not just the “local” interest of the three countries: if NAFTA re-contracts, it will signal a possible potential of geopolitical and trade conflicts. The deal between the US and Mexico was a kind of “rehearsal” for larger agreements (for example, with China).

Thus, interest in the Japanese currency has now increased due to the growth of anti-risk sentiment. Protective assets are in demand, but here it is necessary to take into account two factors. First, today is Friday, and secondly, negotiations on NAFTA can end today with a positive result. This option cannot be ruled out, moreover, in my opinion, such a scenario is basic. Trump’s and Trudeau’s rhetoric has changed dramatically with regard to the prospects of this agreement. Therefore, leaving open positions for the pair USD / JPY until Monday is risky, because the US-Canada dialogue can be continued at the weekend.

From a technical point of view, there is also no confidence in the continuation of a downtrend. On the daily chart, the price is in the Kumo cloud, on the middle line of the BB indicator and on the Tenkan-sen line. In other words, there are no clear signals to decline, the pair is at a crossroads, and the reverse price pullback is not at all ruled out.

Talk about the development of the southern trend will be possible when USD / CAD consolidates below the lower boundary of the cloud Kumo, that is, under the mark of 110.60. In this case, the indicator Ichimoku Kinko Hyo will form a bearish signal “Line Parade”, and the price itself will be located between the middle and bottom lines of the indicator Bollinger Bands on the daily chart. In this case, the price is likely to fall to the next support level, which is at the bottom of the 110th figure and corresponds to the bottom line of the Bollinger Bands indicator.

But at the moment the situation is ambiguous, so I would recommend postponing the decision on the pair until Monday. The fundamental background can change literally in a matter of hours, changing the direction of the price movement.