This week, the dollar-yen pair traded in the 100-point range, but in the end, it completes the five-day trading session almost at the opening positions. Despite the growth of core inflation in Japan, the yen remained under pressure from the US currency, jumping to the middle of the 112th figure. The external fundamental background is of primary importance for the pair, and the structure of Japanese inflation indicates a great influence of the oil market, the quotes of which have gone down again. 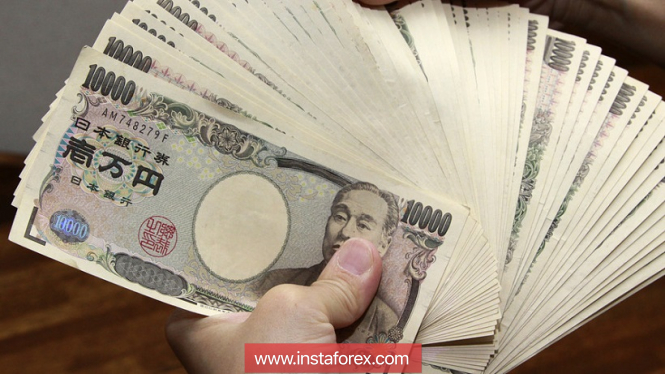 In general, the yen is traditionally dependent on the degree of anti-risk sentiment in the market. Therefore, when one of the advisers to the American president this week accused China of ignoring US trade requirements, the Japanese currency “remembered” its status as a defensive asset and strengthened slightly against the dollar. In addition, the growth of the yen contributed to the negative dynamics in the stock markets of Asia, and China in particular. All this allowed the bears USD / JPY to test the 111th figure. Subsequent events have reduced interest in defensive instruments.

First, Beijing assured the public that it would support the national stock market, stopping sales in the stock market if necessary. Such a position calmed panic, and the yen, in turn, began to lose points.

Secondly, the data on the growth of the Chinese economy and the volume of industrial production published today suggest that the protracted trade war is beginning to affect the key macro indicators of the Middle Kingdom. In view of this circumstance, Beijing is again forced to devalue the national currency, thereby supporting exports and partly leveling the imposed duties. This tactic does not solve the root of the problem, but only reduces its consequences (and even partially), so the market again talked about that after the elections to the Congress, which will be held in less than a month. China and the US will sit down at the negotiating table. Such conclusions reduced anti-risk sentiment among traders and the demand for yen fell.

Without the support of an external fundamental background, the Japanese currency immediately loses its position, since it does not have its own arguments for growth. Extremely weak inflation in Japan leaves no hope for bears USD / JPY. The yen remains under the background pressure of the “pigeon” policy of the national Central Bank. Today’s release of inflation data served as an extra confirmation of this. Despite the growth in the basic consumer price index (excluding volatile food prices), traders were cool about this fact, especially since the indicator was expected to grow to one percent.

First, the pivotal level of inflation has overcome only half the way to the target two percent level. Secondly, the September CPI growth is explained by the increase in expenditures on petroleum products. In other words, inflation increased only due to “black gold”. The cost of the rest of the group of goods increased slightly. It is worth noting that the barrel of the Brent brand fell today under the $ 80 mark, reflecting bearish sentiment. The emotional reaction to the scandal associated with the Saudi journalist subsided somewhat. According to analysts, Saudi Arabia will not use the oil market as a tool of influence in the conflict with the States. Also, the dynamics of quotations of “black gold” was influenced by data from the US. Oil reserves increased by 6.5 million barrels last week, these figures are more than two times higher than the forecasts of experts.

A set of fundamental factors lowered the cost of Brent under the key $ 80 mark. If this trend continues, Japanese inflation indicators may show a reverse trend, replacing weak growth with a gradual slowdown. Here, it is worth recalling that in July, the Bank of Japan expanded the range of the estimated size of the rate, thus admitting the likelihood of monetary policy easing. Therefore, a slowdown in inflation can hypothetically lead to a decrease in the interest rate further into the negative area. The head of the Japanese regulator, Haruhiko Kuroda, is a well-known supporter of the “pigeon” policy, so this scenario is not at all unlikely. At least in the course of his last speeches, he repeatedly pointed out the effectiveness of soft monetary policy. Therefore, in the next year and a half, the regulator can change its parameters except in the direction of easing.

Thus, the risk appetite renewed in the market, paired with the weak data on inflation in Japan, reduced interest in the yen, after which the USD / JPY rate went up again. This week, the situation is unlikely to change drastically (the pair will continue to be traded in the flat), so the main “fighting” for the pair will take place as early as Monday.

Technically, a pair of USD / JPY needs to overcome the border of the 113th figure to confirm the development of the northern trend. If the price rises above 113.05, then the Ichimoku Kinko Hyo indicator will generate a rather powerful bullish signal Parade of lines that will “allow” the pair to grow up to the middle of 114th figure. A reliable level of support is the price of 111.50. At this price point, the upper limit of the Kumo cloud coincides with the lower line of the Bollinger Bands indicator on the daily chart.