Wave analysis of GBP / USD for August 13. The fifth wave is still continuing its construction 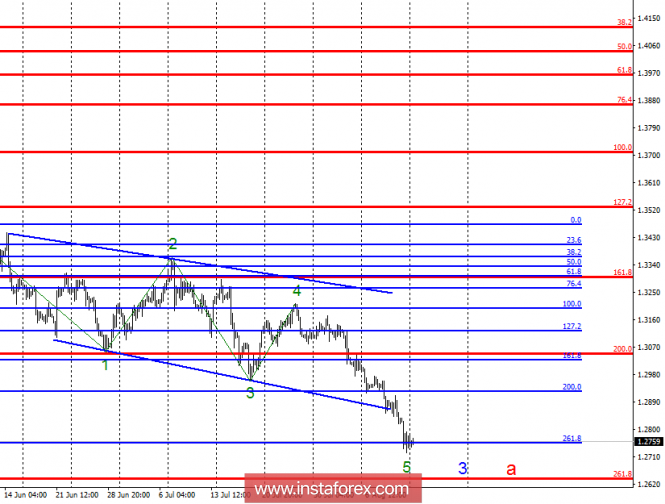 In the course of trading on August 10, the GBP / USD currency pair fell by 60 percentage points. Thus, there is a reason to believe that wave 5, 3, a, has not yet completed its construction. A successful attempt to break through the spent mark of 1.2758 will allow the pair to continue the decline with targets located near the mark of 1.2636. Given a rather strong downward impulse, wave 5 may take a more extended form than was originally intended. An unsuccessful attempt to break one of the target marks may lead to the completion of the construction of wave 3, a.

The GBP / USD currency pair remains in the framework of the construction of the downward trend section. Today, I recommend that you continue to remain in sales in the expectation of a breakthrough mark of 1.2758, which corresponds to 261.8% of Fibonacci, with targets located near the estimated mark of 1.2636, which is equivalent to 261.8% in the senior Fibonacci grid. An unsuccessful breakthrough attempt at 1.2758 could lead to the completion of wave 5, and in the case of this option, I recommend closing sales, since it is possible to build wave 4, a.