Wave analysis of GBP / USD for November 1. The meeting of the Bank of England coincides with wave 4. 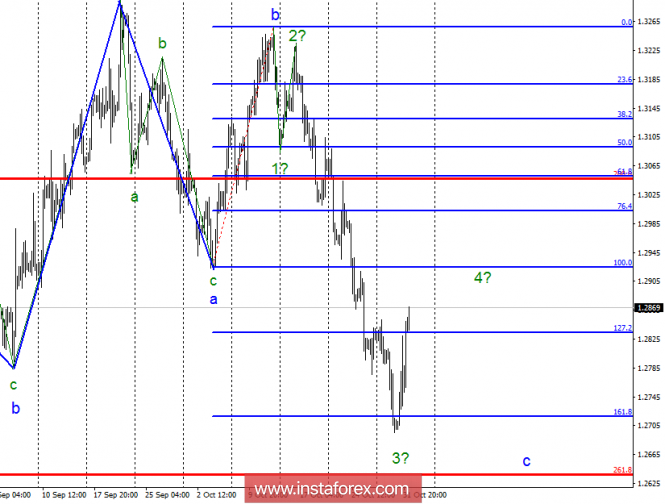 In the course of trading on October 31, the GBP / USD currency pair gained about 55 basis points, and tonight, about 110 more. Thus, there was every reason to assume the completion of wave 3, c. If this assumption is true, then the increase in quotations will continue with targets located near the 100.0% Fibonacci level, within wave 4, c. Such an unexpected growth of the pair is most likely related to the upcoming results of the Bank of England meeting, which will be announced today. If Mark Carney disappoints at a press conference, it can lead to the completion of wave 4 and the transition of the pair to the construction of wave 5, c.

The GBP / USD currency pair has begun to build the estimated wave 4, which is fully consistent with the current wave counting. Now, the pair may rise to 1.2924, but the conclusions are best made after receiving information on rates from the Bank of England and Mark Carney’s speech. After that, I expect quotes to decline within wave 5, c, with targets located near the estimated levels of 1.2638 and 1.2592, which corresponds to 261.8% and 200.0% of Fibonacci.