Wave analysis of GBP / USD for October 3. News background pulls the pound down 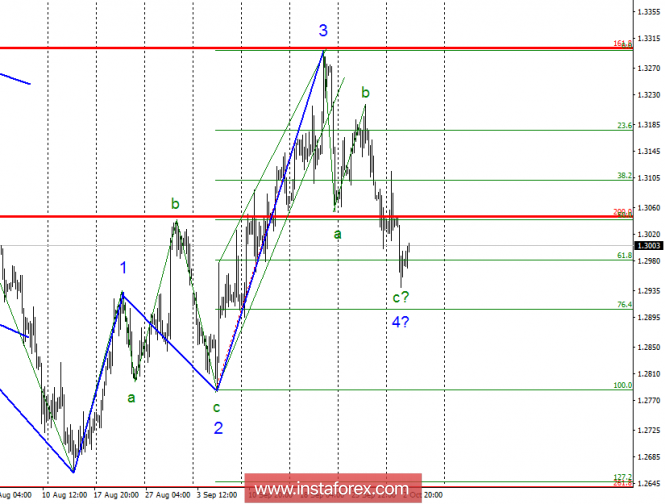 During the trading session on October 2, the GBP / USD currency pair dropped by another 60 percentage points and moved away from the lows reached. Thus, there are grounds for assuming the completion of the construction of the supposed wave c, 4. If this assumption is true, now the construction of the upward wave 5 of the uptrend trend with the targets located above 33 figures will begin. The news background, however, is currently not in favor of the British currency, and it is this factor that can affect wave counting. There was no pronounced unsuccessful attempt to break through any important Fibonacci level, it also confuses in the question of the completion of wave 4.

The currency pair GBP / USD continues to build the estimated wave c, 4. Thus, now I recommend to remain in sales with targets located near the levels of 1.2908 and 1.2786, which corresponds to 76.4% and 100.0% of Fibonacci. An unsuccessful attempt to break through the mark of 1.2908 will lead at least to the departure of quotes from the lows reached, and at the maximum, to complete the construction of the entire wave 4. The news background is of great importance for the movement of the pair and, as a result, in wave counting.