Wave analysis of GBP / USD for October 4. News continues to pull the pound down 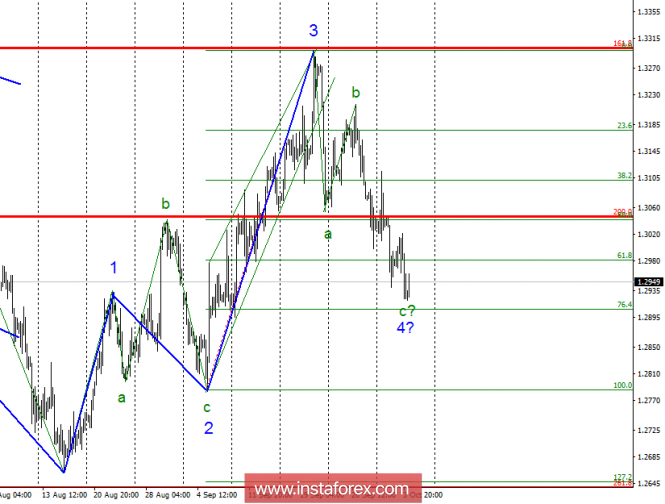 During the trading on October 3, the GBP / USD currency pair lost another 40 percentage points. Thus, the estimated wave c, 4, continues its construction, despite the elongated appearance. An unsuccessful attempt to break through the 76.4% of Fibonacci level can lead to the completion of the construction of this wave. However, as mentioned earlier, the news background is of great importance for the pair now. In particular, any information on Brexit. Since for the most part, this information is now negative, the British currency continues to fall, not paying attention to the fact that, based on the wave marking, the decline should end.

The currency pair GBP / USD continues to build the estimated wave c, 4. Thus, now I recommend remaining in sales with targets located near the levels of 1.2908 and 1.2786, which corresponds to 76.4% and 100.0% of Fibonacci. An unsuccessful attempt to break through the level of 1.2908 may lead to the completion of this wave and the transition of the pair to the construction of wave 5 of the upward trend section. This can prevent news from the UK about the unsuccessful progress of negotiations on Brexit.