Weak prospects for the euro and pound

Macroeconomic data from the eurozone is quite contradictory, the euro looks weak, acting as internal contradictions in the eurozone, and increasing fears about the likely expansion of the trade war.

The volume of production orders in Germany fell by 4% in June, industrial production as a whole fell by 0.9%, which was significantly worse than forecast, year on year decreasing orders by 0.8%, and, quite possibly, the reason – in the escalating trade war. Recent talks between Juncker and Trump reduced tensions, this is noted in the monthly Sentix study, which notes a slight increase in optimism in the business environment, while in the 6-month perspective the index continues to be below zero, meaning the fears of slowing economic growth are very strong. 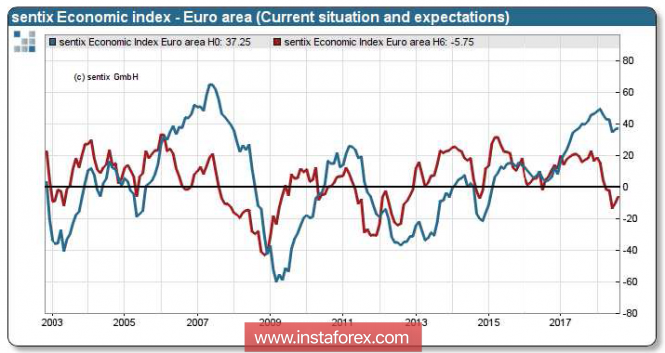 It should also be noted and tightening of financial conditions. Despite the fact that the ECB does not directly fix the date of the first rate increase, the yields of bonds are growing, because the global trend, which is set by the Federal Reserve, can not be ignored.

The currency pair EUR / USD will continue its march to the south, in the near future we can expect a test for the strength of 1.15 support, followed by a decrease to 1.1420.

On Monday, the pound has updated the 11-month minimum, and, most likely, will remain under pressure in the near future.

Despite the fact that the Committee voted for the growth rate unanimously and in every possible way stressed that the situation is under full control, markets still experience significantly greater skepticism than in the spring. Quite an indicative situation with consumer prices and the interpretation of their dynamics by the Bank of England.

The quarterly inflation report underscores that the Bank of England expects a certain slowdown in inflation starting in August, as two factors will play a role: reducing energy prices and the effect of a depreciating pound, while domestic inflationary pressures are gaining momentum and remain stable. However, when considering the components of inflation, it is striking how a certain slowdown in price growth in the services sector in comparison with 2017, as well as an even clearer decline in prices for the main group of goods without taking into account energy carriers and food products. In fact, just the internal inflationary pressures are shrinking and its further growth is in great doubt. 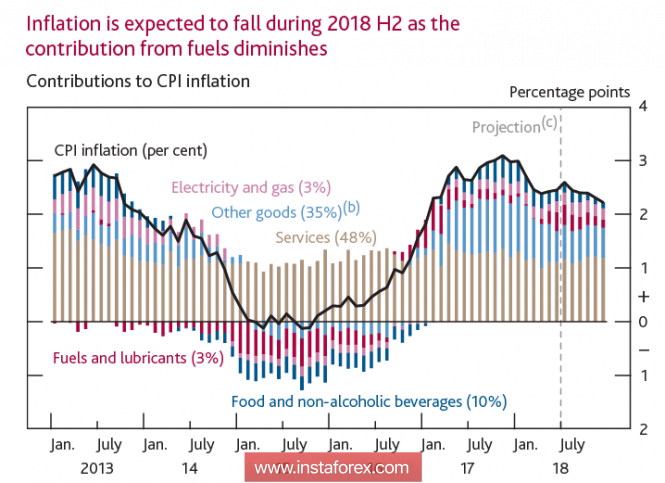 The market seems to be rather skeptical about the UK’s economic prospects in light of the withdrawal from the EU in March 2019 and calls into question the intention to raise the rate again in May next year. There is a reassessment of the prospects for the rate, the next step can be postponed to September or even December 2019, respectively, the pound will look weaker than predicted in recent months.

The currency pair GBP / USD will continue to decline, medium-term target of 1.2770, growth attempts will be used by players as an excuse to enter short positions.

The Bank of Japan in fact recognized the inability to lead the country out of the deflationary trap, proceeding to curtail the asset repurchase program after 5 years of struggle. Changing the method of buying bonds, BoJ provoked an increase in yields, while Reuters’s forecast at a rate indicates that BoJ can raise rates twice this year.

Household spending in Japan showed only a short period of growth, as of June, a decrease of 1.2%, low consumer activity has negated all efforts to disperse inflation.

The currency pair USD / JPY will continue to trade in the sideways range with a slight advantage in the direction of growth, it is likely that the attempt will rise again to 112.15.

Oil prices are trying to grow against the backdrop of US sanctions against Iran and a significant decline in production in Saudi Arabia. Stop the price increase may slow the global economy, these fears are still weak, so the mouth, most likely, continued. Brent will attempt to rise to 75.80 in the short term.

The ruble continues to confident movement to 65, however, it is unlikely to overcome this level from the first attempt. The weakening of the ruble is largely emotional and will stop with a decrease in currency purchases by the Ministry of Finance.