For almost the entire past week, the single European currency continued to lose ground. And although at the very end of the week, the dollar began to lose ground, the euro still could not recover the losses it had suffered at the very beginning of the week. What is most interesting is that the weakening of the single European currency has a very specific culprit, Italy. In the Italian Parliament, they once again discussed, or more precisely, argued, the budget deficit, which was set at 2.4%, having solemnly assured everyone present that it would soon fall to 2.0%. But Italy has a huge public debt, and while maintaining the budget deficit, only science fiction writers can hope to reduce the size of the debt. This state of affairs greatly upset a number of descendants of ancient Roman senators, and they considered it their duty to state that Italy’s financial problems can be solved only by abandoning the single European currency and returning to their beloved and forgotten lira. Naturally, there immediately began to appear arguments about what would happen if Italy leaves the eurozone, and the result was the same for everyone, the disintegration of the single European currency. After all, if the third eurozone economy comes out of monetary union, the role and importance of the single European currency will greatly decrease, and it is quite possible that there will be no sense in it anymore. Moreover, many European countries have similar problems with Italy, and the experience of the Italians may seem tempting and attractive to them. Responsibilities for extinguishing the fire were imposed on the Italian Prime Minister, who urgently gathered the government, during the meeting of which, as well as ritual beating himself with a heel in the chest, were made oaths of loyalty to the single European currency, which somewhat reduced the hysterics.

If you look at the statistics, then the single European currency really had to grow due to extremely disappointing American data. Especially, if you recall the contents of the report of the US Department of Labor. In fairness, it should be noted that by the time of its publication, the panic about Italy had somewhat subsided, and market participants could read the contents of the report, which only caused tears, with peace of mind. The unemployment rate, of course, fell from 3.9% to 3.7%, but this is the only thing to be happy about. The share of labor in the total population remained unchanged, and only 134 thousand new jobs were created outside of agriculture, which is significantly less than the projected 185 thousand. Yes, and 270 thousand new jobs were created last month, so the results are extremely poor. The growth rate of the average hourly wage slowed from 2.9% to 2.8%. While other data on the labor market, which came out on the eve of the publication of the report of the Ministry of Labor, inspired optimism. In particular, according to ADP, employment increased by 230 thousand versus 163 thousand in the previous month. The total number of applications for unemployment benefits decreased by 21 thousand due to the fact that the number of initial applications decreased by 8 thousand, and repeated ones by another 13 thousand. Also, construction costs increased by 0.1% and the number of production orders by 2 3%. Moreover, sales of vehicles increased from 16.7 million to 17.4 million. The index of business activity in the manufacturing sector increased from 54.7 to 55.6, and in the services sector, it decreased from 54.8 to 53.5. As a result, the composite index of business activity fell from 54.7 to 53.9, as the service sector has a much greater weight. But all these data came out when the market was agitated by the events in the Italian parliament. And the significance of the report of the Ministry of Labor is much higher than that of all these data combined.

If we talk about European statistics, it was pretty good, as the growth rate of retail sales accelerated from 1.0% to 1.8%, and the unemployment rate fell from 8.2% to 8.1%. The business activity index in the manufacturing sector decreased from 54.6 to 53.2, but in the services sector, it rose from 54.4 to 54.7. However, the decline in the production index is so great that the composite index of business activity fell from 54.5 to 54.1. Also, the growth rate of producer prices slowed from 4.3% to 4.2%.

Although last week, extremely important data are already released, this will not let us relax, as, in the US, there are data on inflation. They will be preceded by data on producer prices, whose growth rates should remain unchanged. But inflation itself can accelerate from 2.7% to 2.8%, and such a development should finally remove all doubts about the future actions of the Fed. If inflation does not slow down, and is stable, then the Federal Commission on Open Market Operations will continue to tighten monetary policy in accordance with previously outlined plans. But stocks in the warehouses of wholesale trade can increase by 0.7%, and if the forecast is confirmed, it will mean that they have been growing for eleven months in a row. So you can safely worry about the further growth of industrial production and retail sales. The number of applications for unemployment benefits should be reduced by another 2 thousand due to a decrease in the number of initial applications for benefits. The number of repeated applications may remain unchanged.

Europe also will not let us be bored, as the minutes of the European Central Bank board of directors on monetary policy will be published. There is growing doubt in the market that the ECB will nevertheless reverse the quantitative easing program. Moreover, not only Italy is experiencing difficulties with the size of public debt, and the curtailment of the quantitative easing program calls into question the ability of many countries to solve this issue. Moreover, the risk of slowing inflation is still quite high. And all these problems to some extent may be reflected in the text of the protocol, which will have a very negative impact on the single European currency. Moreover, industrial production, which so far demonstrates a decline of 0.1%, can deepen it to 0.3%, which also does not give optimism.

Thus, the dollar can be strengthened with a new force, and the mark of 1.1350 does not seem so insane. 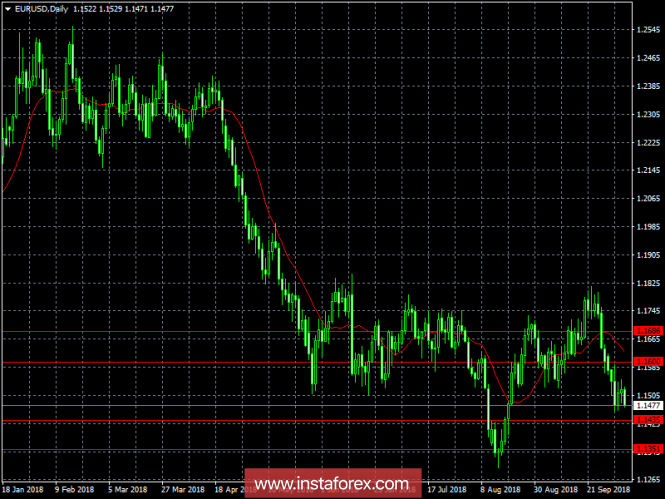