Weekly review of the foreign exchange market as of August 20, 2018

During the past week, the dollar failed to develop its success, although, at its very beginning, it continued to grow, but rather by inertia. It turned out that in the absence of serious political factors, the dollar did not have any reasons for growth, as the US statistics was rather weak, especially against the background of data from Europe. In particular, the growth rate of retail sales slowed from 6.6% to 6.4%, although industrial production accelerated from 4.0% to 4.2%. But the value of retail sales is much greater, and given that the data came out simultaneously, few people paid attention to the growth of the industry. Yes, and what kind of industrial growth can be discussed, if commercial commodity stocks have been growing for six months in a row, and over the past month they have grown by another 0.1%. This clearly indicates that if sales do not start to rise again, then the industry will soon face a serious recession. True, the next day, quite good construction data came in, as the number of construction projects started increased from 1,158 thousand to 1,168 thousand, and issued construction permits from 1,292 thousand to 1,315 thousand. Together with them, data on applications for unemployment benefits, and it turned out that the number of primary applications decreased from 214 thousand to 212 thousand, but repeated from 1,760 thousand to 1,721 thousand.

But in Europe, the data came out much more interesting. If we talk about the euro area, then only industrial production can be recorded as negative data, the growth rates of which have slowed from 2.6% to 2.5%. However, the second GDP estimate for the second quarter showed that the pace of economic growth, although slowed, but not to 2.1%, as shown by the first estimate, but to 2.2%. In the first quarter, economic growth rates were 2.5%. Also, final data on inflation showed that it continues to grow and accelerated from 2.0% to 2.1%, and this, for the time being, removes any risks regarding the possibility of extending the ECB’s quantitative easing program. In the UK, there were also a lot of interesting data, in particular, the unemployment rate fell from 4.2% to 4.0%. Although the growth rate of wages has slowed, this is perfectly normal in the face of a decline in unemployment. Inflation also continues to grow and has already reached the level of 2.5%, and if we recall the words of a number of representatives of the Bank of England about the possibility of resuming the action of the English quantitative easing program, then inflation growth makes this prospect illusory. Well, retail sales increased their growth rate from 2.9% to 3.5%. Yes, there to say, even Russia, which constantly imposes new sanctions, demonstrates quite a good dynamics. Yes, retail sales growth rates slowed from 3.0% to 2.5%, but this ends the negative. Moreover, in contrast to the United States or Europe, retail sales have less weight than industry, whose growth rates have accelerated from 2.2% to 3.9%. And the unemployment rate remained unchanged.

If you forget about the US actions in the international arena, the dollar should lose its positions, which was observed at the very end of the week. However, this trend was more moderate, since uncertainty plays just the benefit of the dollar, but in the short term. In the long run, US actions only undermine confidence in the dollar, which will inevitably bring a serious blow to the US economy.

This week two extremely important events will take place, and both of them will take place in the USA. First, the text of the minutes of the meeting of the Federal Commission for open market operations will be published, and it is expected to see confirmation that by the end of this year the Fed will double the refinancing rate twice more. Themselves these increases are already embedded in the price, so this will not lead to a serious increase in the dollar. But if investors have any doubts about the future actions of the Fed, the dollar will have to give up the won positions. The day after the publication of the text of the protocol, an annual meeting will begin in Jackson-Hole, and there is virtually no doubt that the White House’s foreign trade initiatives will be the central theme. Even the NATO allies of the United States have more and more questions and doubts. Especially after the US imposed sanctions against Turkey, which has the second largest army among NATO countries. If the United States imposes sanctions even on its allies, then express surprise and indignation at the fact that in response its ally imposes restrictions on the import of goods from America, what else can we expect from the White House? Such unpredictability and assertiveness of the country emitting currency, in which almost all international trade is carried out, undermines confidence in this very currency. And it is a dollar. And after all, everyone sees that all sanctions, no matter to whom they are imposed, are purely economic in nature, to create additional advantages for American companies. If, in the American economy, everything is as good as statistics show, then why is this done? So, more and more questions arise about the real state of affairs in the American economy. And it is natural that this will not add confidence to the dollar. True, in the short term global uncertainty gives the dollar forces. And of course, and against the backdrop of such events, few will pay attention to macroeconomic statistics. In particular, home sales in the secondary market should grow from 5.38 million to 5.42 million, and new homes from 631 thousand to 650 thousand. At the same time, the number of applications for unemployment benefits is expected to increase, and the number of primary applications should An increase from 212 thousand to 216 thousand, and repeated from 1,721 thousand to 1,767 thousand. Preliminary data on business activity indices should show the invariability of the index in the service sector with a reduction in the production index from 55.3 to 55.2, and this against the backdrop of growth in industrial production. This is doubly strange, as orders for durable goods should increase by 0.8%. So it is likely that the production index will show growth.

In Europe, there have already been data on the rate of growth in the construction industry, which accelerated from 2.0% to 2.6%. Just like in the US, preliminary data on business activity indices are coming out, and they can show the growth of the service sector from 54.2 to 55.0, while the production index fell from 55.1 to 54.6. Given the greater weight of the service sector, the composite index can grow from 54.3 to 54.4. But one of the main events of the week will be the publication of the minutes of the ECB’s meeting on the monetary policy. Investors hope to see in it the confirmation that after December the ECB will not extend the program of quantitative easing, which will give confidence to the single European currency. Given that inflation in Europe continues to grow, most likely the ECB will fulfill its promise, and already in the middle of next year, you can wait for the first time in many years to raise the refinancing rate. So, it is most likely that the euro will be able to grow to 1.1475. However, if what is happening in Jackson-Hole will be perceived with a positive for the dollar, and such a probability, although not great, then the euro will drop to 1.1350. 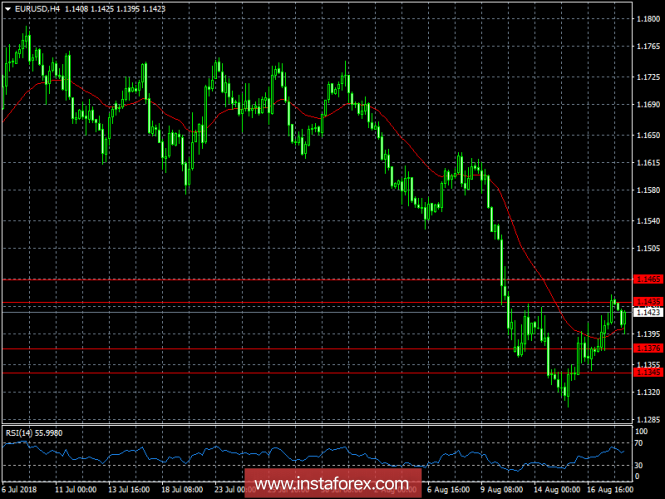 In the UK there is very little data, but the forecasts for them are extremely positive. In particular, public sector borrowing may shrink by £ 2.3bn, which will be received with enthusiasm and help the pound. Also, the number of approved mortgages should increase from 40,541 to 40,944, and given the huge importance of the UK property market, the pound will receive another reason for growth. So it is most likely that the pound will be able to grow to 1.2825. But as with the single European currency, much depends on the news that will come from Jackson Hole, and there is a small chance that at the very end of the week the pound will rush to the 1.2650 mark. 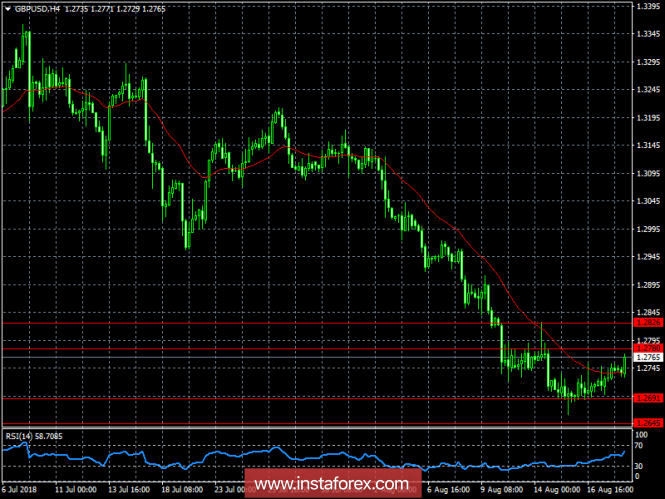 With the ruble, everything is somewhat more interesting, since no data comes out, and they do not have such instant influence on the ruble. The ruble depends on geopolitical factors, and the introduction of new sanctions, which come into force on August 22, is one of them. True, the very decision to impose new sanctions has already affected the ruble, and the very fact of the beginning of their action will not lead to new consequences. Now, however, the theme of the fact that these sanctions will cause substantial damage to the Russian oil and gas industry and the entire economy is being discussed. True, such a position raises many questions, since as early as 2014 Russian oil and gas companies have practically lost the opportunity to receive loans from Western banks, as well as restrictions on the supply of equipment. But in the end, companies continue to work, and last year a record was set for oil production. Conversations about the fact that a ban on oil imports from Russia, as well as on the purchase of the Russian state stake, may be imposed, are fantasies since such measures will lead to disastrous consequences for the whole world economy. This is directly spoken by the American economists themselves and the respected media. So the ruble will gradually recover, and the dollar will fall to 66 rubles. 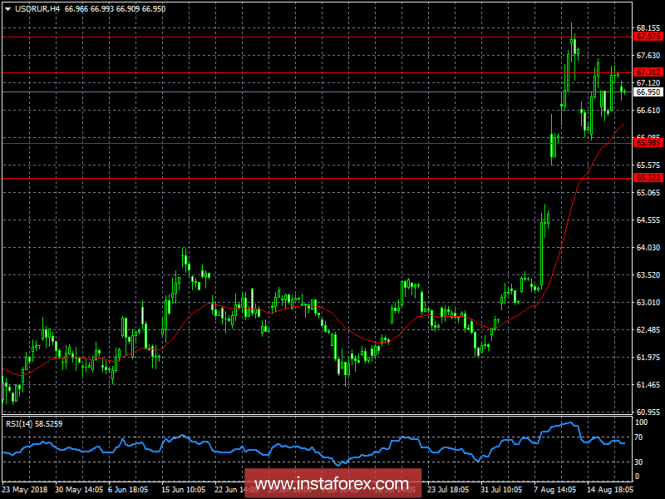