Weekly review of the foreign exchange market from 27.08.2018

The penultimate week of summer was accompanied by a weakening of the dollar, although the content of the text of the minutes of the meeting of the Federal Commission on Open Market Operations was rather positive. In fact, the content of the text of the minutes removed all doubts about the fact that the Fed will raise the refinancing rate twice before the end of the year. However, this did not produce the desired effect, since such a scenario has long been embedded in the value of the dollar. The dollar made a serious attempt to grow during the first day of the annual meeting in Jackson hole, when one of the representatives of the Federal Open Market Committee said that the rate of increase in the refinancing rate will be maintained next year. But all the optimism evaporated the next day, when the head of the Fed said that the question of the rate of increase in the refinancing rate next year will be considered on the basis of macroeconomic dynamics. Taking into account that these very macroeconomic indicators show increasing signs that the US economy is slowing for a few months already, there are big doubts about the Fed’s action next year, which did not allow the dollar to develop its success, and even led to its weakening. And although the content of the text of the minutes of the meeting of the ECB’s board on monetary policy did not give an unambiguous answer about the further fate of the quantitative easing program, which means the continuing probability of its next board, the dollar could not take advantage of this. The reason lies in the fact that, despite assurances from ECB representatives, investors take into account this probability of the development of events. Yes, and Donald Trump added fuel to the fire on the eve of the start of negotiations between the US and China on trade issues, writing on his Twitter that he does not expect any progress from them. This means that the US intends to negotiate only on favorable terms, but they have no opportunity to impose their will. Namely, this is the main problem for the dollar.

If you look at the macroeconomic data, it only once again confirms that the dollar had nothing to grow. Home sales in the secondary market fell by 0.7%, and they have been declining for six months in a row. For the second consecutive month, sales of new homes are also declining, this time by 1.7%. After a brief growth, within just one month, orders for durable goods also resumed their decline, falling by 1.7% at once. Preliminary data on business activity indices were also very weak. Thus, the index of business activity in the service sector decreased from 56.0 to 55.2, and the production index from 55.3 to 54.5. So the composite index of business activity fell from 55.7 to 55.0. The only thing that could please investors is the data on applications for unemployment benefits, the total number of which, instead of increasing by 5 thousand, decreased by 4 thousand. And the number of both initial applications and repeated ones decreased. But compared to all other data this is clearly not enough.

This week there is very little data already in the US, and forecasts for them are rather negative. Another assessment of the GDP growth rate for the second quarter should show weaker results than the previous one. Of course, the pace of economic growth is accelerating, but not as much as previously expected, so investors can revise their long-term plans. Also, against the background of the continuing decline in housing sales, a further decline in unfinished housing sales transactions is expected. This time they should be reduced by 6.0%, and this will be the second consecutive decline. Also, this does not foretell a rapid growth in housing sales, so the picture looks quite sad. The only thing that can inspire optimism is data on personal income and expenses, as expenses should grow stronger than income, and this gives hope that consumer activity will grow.

In Europe, the forecasts are more optimistic, as the growth rate of consumer lending should accelerate from 2.9% to 3.0%, and unemployment could fall from 8.3% to 8.2%. Preliminary data on inflation may alert investors, as it is expected that it will remain unchanged. This development retains the possibility of a further extension of the quantitative easing programme. But the single European currency will receive support from the German Foreign Ministry. The fact is that the German foreign minister said that he will soon present a foreign policy strategy towards the United States. Heiko Maas, commenting on his statement, said that Europe should take on the role of a counterweight to the United States, and that the European Union should become a pillar for the international order. Such statements once again demonstrate that the US is losing its influence and is no longer able to impose its will, even on its allies. But a more active position of Germany can increase interest in the single European currency. Thus, there is a high probability that by the end of the week the single European currency will grow to 1.1675. 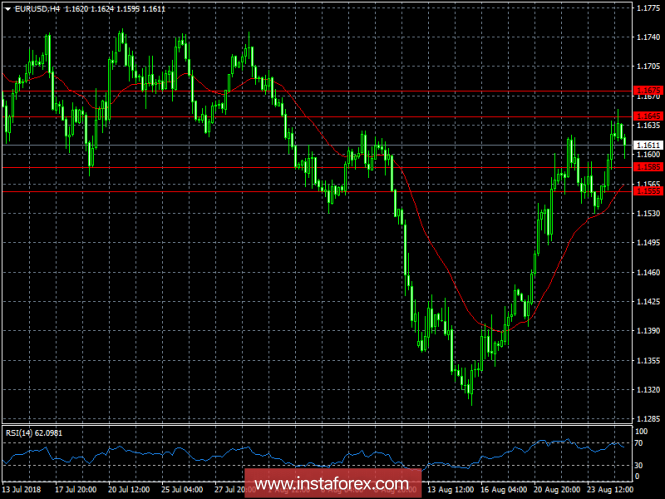 According to the UK, or rather its macroeconomic statistics, the forecasts are not so comforting. The net volume of consumer lending should decrease from 5.4 billion pounds to 5.2 billion pounds, and the number of approved mortgage applications may be reduced from 65,619 to 65,500. And the foreign policy position of Germany will have little impact on the UK, at least for the first time. So the pound will be supported by extremely weak statistics in the US, so there is a high probability of its consolidation at 1.2825. 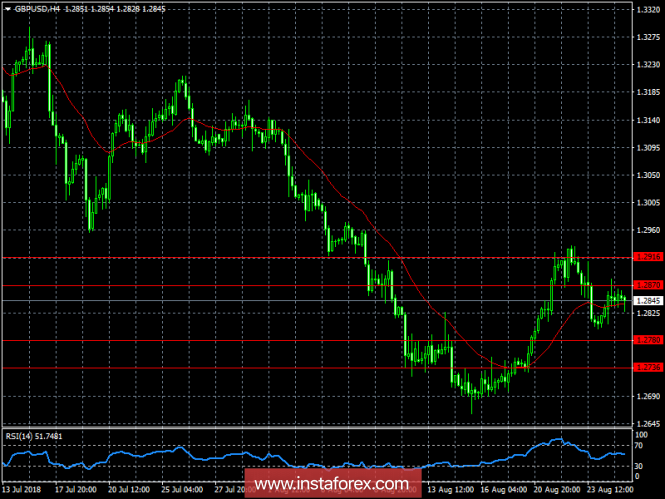