Weekly review of the foreign exchange market from September 10, 2018

Last week, the dollar made serious attempts to strengthen. As a result, it managed to continue to strengthen with respect to the ruble, though not at such a pace. Also, the dollar was able to strengthen slightly against the single European currency, but it did not work with the pound. Although during the week, the pound was quite seriously cheaper but finished the week in the same place where it started. Almost the entire week, American statistics were completely multidirectional. Thus, the total sales of vehicles decreased from 16.8 million to 16.7 million. The index of business activity in the manufacturing sector fell from 55.3 to 54.7, while in the service sector, from 56.0 to 54.8. Naturally, this led to a decrease in the composite index of business activity from 55.7 to 54.7. Moreover, production orders decreased by 0.8%. So, there was no reason to be happy, but much more important data came out. This is the report of the US Department of Labor. Initially, the content of the report was somewhat disappointing, as the unemployment rate remained the same, and more importantly, the proportion of the workforce in the total population decreased from 62.9% to 62.7%. But with a closer look at the text of the report, investors were cheered up. The fact is that out of agriculture, 201 thousand new jobs were created, and the growth rate of the average hourly wage increased from 2.7% to 2.9%. It turns out that employment is growing in the face of rising incomes. This is an extremely positive signal, and, in theory, the dollar should be strengthened even more.

The fact that the dollar should have strengthened much more actively becomes doubly clear after a cursory glance at European statistics, as European GDP growth rates in the second quarter slowed from 2.5% to 2.1%. Earlier, it was assumed that economic growth rates slowed from 2.5% to 2.2%. Also, the growth rate of retail sales slowed from 1.5% to 1.1%. But in Europe, there was also positive news that could not change the general mood, but only a few smoothed the negative. The fact is that unlike the US, the European index of business activity in the services sector grew from 54.2 to 54.4, which allowed the composite index of business activity to grow from 54.3 to 54.5. Also, the growth rates of producer prices accelerated from 3.6% to 4.0%. But in any case, the slowdown in economic growth, paired with a slowdown in retail sales, should have given a much greater decline in the single European currency. And much more interesting with the pound, as only the index of business activity in the service sector, showed an increase from 53.5 to 54.3. While the index of business activity in the manufacturing sector fell from 53.8 to 52.8, and in the construction sector from 55.8 to 52.9. So, the question arises as to what constrained the growth of the dollar.

The questions are caused by the growth of the dollar against the ruble, as inflation in Russia accelerated from 2.5% to 3.1%, and Elvira Nabiullina said that the next meeting of the Bank of Russia’s board will consider not the reduction of the key rate, but its increase. And all this should lead, if not to the growth of the ruble, then at least to its stability.

So the answers again have to be found in the bulletins of political news.

If we talk about the single European currency and the pound, then we need to remember about Brexit and all that is associated with it. More recently, representatives of the European Union have stated that they are ready to offer the UK such conditions of cooperation that no one has. In response, Theresa May said that the United Kingdom will not make any concessions, hinting that she knows about the details of these conditions, and they are not so good. But last week, there were reports that Britain and Germany agreed to give up a number of mutual demands in order to reach a common agreement at the talks. This development of events strongly inspired market participants. Simultaneously, along with this, a political scandal is gaining momentum in the United States caused by the publication of a book in which, referring to unnamed sources, the White House’s plot against Donald Trump is described. A little later, in a number of mass media, correspondence appeared allegedly between the employees of the administration of Donald Trump, where the question of his removal from power is being discussed. Naturally, the US President was furious, and all prominent representatives of the White House began to give official comments one by one, that they did not take part in any conspiracies and did not know anything about it. Many have assured that they are ready to undergo an immediate check on the lie detector. And, finally, this does not add confidence in the future, so that even though the dollar had good reasons for growth, purely political factors hindered it.

As for the ruble, its weakening is connected exclusively with political factors, since purely economic factors have an extremely weak influence on it. And it’s about the case of the Violins. The new information provided by Great Britain, although it causes a lot of questions and criticisms, still implies a certain intelligible answer that Russia does not give. And the situation in Syria is heating up. But on all these points Russia is limited to some kind of unintelligible excuses, which raises many questions about its ability to withstand pressure. So, it is not surprising that investors are trying to close their ruble positions in order to wait for at least some clarity.

If you look at what data should be released this week in the US, it is unclear how to grow the dollar. Of course, the increase in consumer lending from $ 10.2 billion to $ 13.0 billion is quite good, but not enough. Moreover, if commodity stocks in wholesale warehouses should increase by another 0.7%, producer price growth rates will slow from 3.3% to 3.2%, and inflation from 2.9% to 2.7%. And the growth rates of industrial production and retail sales may slow down. So, it’s time to worry that the Fed can reconsider its plans on the rate of increase in the refinancing rate. Moreover, the scandal surrounding a certain conspiracy against Donald Trump will only gain momentum. So, the dollar can grow only if something extraordinary happens in the Old World.

True, the continental is not particularly pleased with a large amount of statistical data. The slowdown in industrial production is expected to slow from 2.5% to 2.4%. And that is all. However, all attention will be focused on the results of the meeting of the ECB Monetary Policy Board. Naturally, no changes are expected, but the ECB is waiting for further confirmation that after December, the program of quantitative easing will not be prolonged. And at the moment, such fears are justified, as inflation slows down, and with it consumer activity. However, it is unlikely that, against the background of preliminary data on inflation, the ECB will make hasty decisions. So, the ECB will once again announce plans to curtail the quantitative easing program, as well as the subsequent increase in the refinancing rate. So, by the end of the week, the single European currency should strengthen to 1.1675. 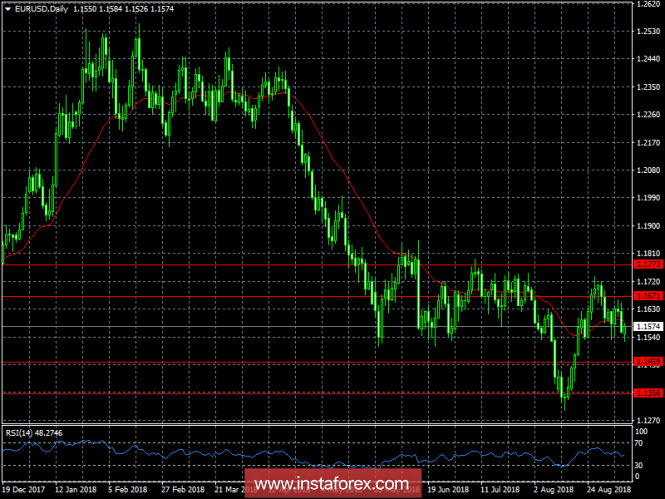 Much more interesting will be in the UK, where data on industrial production has already emerged, whose growth rates have slowed from 1.1% to 0.9%. But this is the only negative that is expected by the pound. Data on the labor market can show the stability of the unemployment rate combined with the acceleration of the growth rate of the average wage both with and without bonuses. Well, the main event will be a meeting of the Bank of England’s Monetary Policy Board. From the department of Mark Carney will wait for at least hints about further plans of the regulator. The market is now in the state of waiting for further growth in the refinancing rate in the US, as well as serious tightening of monetary policy in Europe. Against this background, the Bank of England should designate its medium-term position, and it should be aimed specifically at further raising the refinancing rate. If the results of the meeting of the Bank of England are different, then the pound will be extremely difficult. But while everything indicates that the English regulator will please market participants, and this will allow the pound to strengthen to 1.3050. 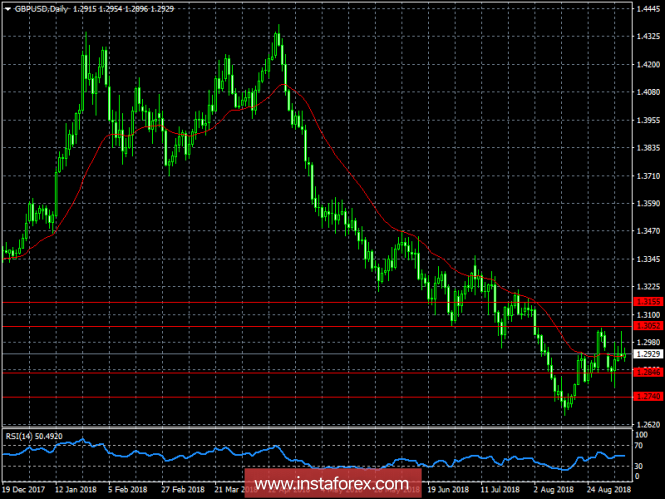 But the ruble has a completely different story. And it does not matter whether the Bank of Russia will raise the key rate or not. Even if Elvira Nabiullina goes to such an impractical step, this will not significantly affect the ruble. While everyone thinks only about new sanctions, since no one doubts that they will be entered. Considering that all previous sanctions did not have the same effect as the US expected, so that everyone is waiting for new, really harsh sanctions. It is this fear, and most importantly the lack of understanding what exactly will be, and scares. Fear is the most important enemy, as it is irrational, and nothing will prevent market participants from further getting rid of their ruble assets. So, it is worth waiting for the growth of the dollar to 71.00 rubles. True, the dollar is so heavily overbought that at least some kind of relaxation or calm will lead to a weakening of the dollar to 69.00 rubles. But while it is most likely that the ruble will continue to weaken. 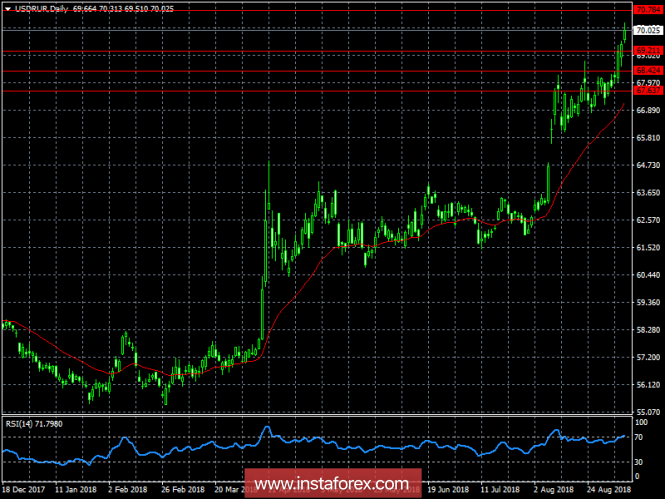