Politics periodically takes over and becomes the main driving force in the market. Although politics is nothing more than the continuation of the economy, and everything should be the other way around. However, oddly enough, the market reaction to political events over the past week is fully consistent with the general tendency to strengthen the dollar. So there was no contradiction between economics and politics.

The first event was the resignation of two ministers in the UK. The ministers for Brexit and foreign affairs resigned. They explained their decision by disagreeing with the desire of Theresa May to sign a soft exit from the European Union, implying the preservation of existing trade agreements. In their opinion, it is contrary to the will of the people expressed during the referendum. Thus, there was a threat of a development of political crisis, and on the horizon loomed the specter of early parliamentary elections. And this is just nine months before the final withdrawal of the UK from the European Union. Naturally, such tricks do not add confidence in the future, which immediately affected not only the pound, but also the single European currency. The issue concerns both sides of the negotiation process.

Investors did not have time to take a breather and rejoice at the fact that early elections in the UK are not expected, as Donald Trump arrived in Europe, who immediately began to behave like an elephant in a China shop. His first destination was Brussels, where he took part in the summit of the heads of state of NATO. Even during the election campaign, Donald Trump was much indignant about the fact that NATO allies were not too quick to deal with their own defense, which forces the US to spend too much money on military spending. Including to ensure the security of Europe. Immediately after winning the presidential election, he immediately began to fulfill one of his campaign promises and began to demand from allies to increase military spending to a minimum of 2.0% of GDP set by NATO rules. Long breaking, and without much enthusiasm, the European allies agreed to increase defense spending to the set minimum, though not immediately, but by 2025. Apparently, Donald Trump took time to realize the fact that even if he will be re-elected for a second term, by the date indicated by the Europeans, he will in any case leave the White House with things. So, as he arrived in Brussels, Donald Trump demanded from the European allies for NATO to immediately increase military spending to 2.0% of GDP. From this pressure, many of the European leaders, apparently, began to quickly change diapers, and investors continued to sell the single European currency. The fact is that European countries cannot increase defence spending. More precisely, they can, but only by increasing taxes, which are already one and a half times higher than in the US, increasing government borrowing, of which they already have so much that they do not know what to do with all this, or by cutting social spending, which they already finance at the expense of debts. Thus, the only thing the Europeans can do is cut it alive, that is, to reduce social spending. Naturally, the voters will not understand them, and very soon there will be other politicians in Europe, but the current ones do not really want to part with their warm places. For them, such a reversal would be political suicide. Well, the funny thing is that this step will destroy the European social paradise.

Satisfied with the scent of a childish surprise in Brussels, Donald trump went to London. After a meeting with Theresa May, it occurred to someone that Trump should be given the microphone, and the US president immediately shared his thoughts about what would be better if the British prime minister was Boris Johnson, who recently resigned as foreign minister. It sounded so that it is categorically unclear whether he expressed his private opinion or the position of the White House. In any case, investors are again worried about the political crisis in the UK, which may result in early elections. Naturally, in anticipation of the issuance of the divorce between Britain and Europe, this adds only acute sensations.

As mentioned earlier, political equilibrium fully fits into the economic logic of the further strengthening of the dollar. After the controversial data on the labor market, data came out for open vacancies, the number of which decreased from 6,840 thousand to 6,638 thousand. For a short time this added concern, but the data on applications for unemployment benefits, which fell by 21 thousand, somewhat reduced jitters. In particular, the number of initial applications for unemployment benefits decreased from 232 thousand to 214 thousand, and repeated from 1,742 thousand to 1,739 thousand. Most of all, investors were pleased with the data on inflation, which further encouraged market participants. Thus, the growth rate of producer prices accelerated from 3.1% to 3.4%. In turn, the final data on inflation confirmed its growth from 2.8% to 2.9%. So market participants can still hope that by the end of the year the Fed will raise the refinancing rate not once, but twice.

If you look at the British data, the pound clearly had reasons for the decline. The fact is that the growth rate of industrial production has slowed from 1.6% to 0.8%, so there is no reason for joy.

Perhaps the main event of the week is the meeting between Vladimir Putin and Donald Trump, which will be held on Monday in Helsinki. Given that Donald Trump had much fun speaking in Europe, as well as his desire to oust European and Chinese manufacturers from the American market, he can present another surprise. It is possible that the meeting will be followed by not the most joyful statements about Europe, which will negatively affect the mood of investors.

But even without a political show, we will have a very busy week. Thus, in the US, a sharp slowdown in the growth rate of retail sales from 5.9% to 3.7% is expected, which will make everyone remember the growth of inflation, which is ahead of wage growth. But almost immediately after that, the dollar will be given a chance to improve its position somewhat due to data on industrial production, the growth rate of which can accelerate from 3.5% to 3.9%. So Donald Trump can once again shout that he is fulfilling his election promise to return the production to the United States. In addition, the total number of applications for unemployment benefits should be reduced by 3 thousand. Although this is not enough, this should be due to repeated applications, the number of which can be reduced from 1,739 thousand to 1,730 thousand. The number of initial applications for unemployment benefits, as is expected to increase from 214 thousand to 220 thousand data on repeated applications for unemployment benefits are more important, as they give an understanding of long-term unemployment. Also, although the number of construction projects starts may decrease by 4.0%, the number of construction permits issued should increase by 6.0%. In general, the data are expected to be multidirectional, and it is quite difficult to draw a certain conclusion.

Fortunately, there are quite a lot of statistics in the UK that can help market participants determine their preferences. Everything will start with the data on the labor market, which are expected to be quite alarming. The fact is that with the stability of the unemployment rate, as well as the growth rate of average wages, including bonuses, the number of applications for unemployment benefits is projected to increase by 2.3 thousand, as well as the slowdown in the growth rate of average wages without bonuses from 2.8% to 2.7%. This is a clear deterioration of the situation in the labour market. Moreover, inflation should accelerate from 2.4% to 2.6%, and against the background of a slowdown in average wage growth, this looks extremely alarming. Although the growth of inflation will be perceived positively, as investors will have more reasons to hope for an increase in the refinancing rate of the Bank of England. Also, there will be data on retail sales, the growth rate of which should remain unchanged. As a result, inflation is expected to rise and wage growth to slow down. In general, the picture is neutral, as after the negative data, a positive one is expected.

In other words, if you look at the forecasts for macroeconomic indicators, you should expect the consolidation of the pound at the mark of 1.3250. However, Donald Trump can again surprise, and then the pound will drop to 1.3150. 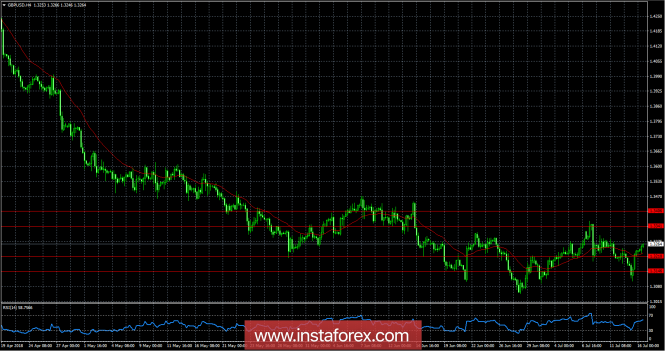